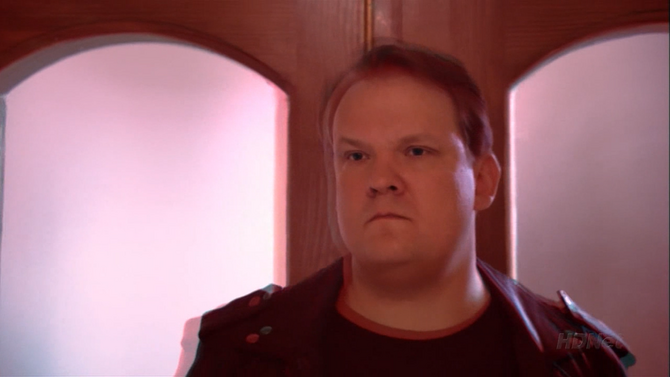 Rocky Richter-Wang is an identical quintuplet of Andy Richter, Donnie Richter, Emmett Richter, and Chareth Richter. He is Andy's stunt double and is not happy that Andy is "a pig", which means Rocky has to look like "a pig" too.

After The Muffin Man (actually George Bluth) sends Donnie Richter a basket of poisoned muffins, Rocky pursued Michael at the Model Home because Michael was seen threatening Donnie at Openings after George Michael said some hateful things about his father (in reality he was reading Maeby's hateful thoughts about her father Tobias.) ("S.O.B.s")

Rocky fills in for Andy Richter on Conan as he unable to make it while working with Michael in the movie. ("The B. Team") Rocky arrests Maeby for sleeping with a 17 year-old, posing undercover as his brother Donnie Richter. ("Señoritis") Rocky dines on Andy's account at the Ealing Club, pretending to be Andy. ("It Gets Better") Rocky gives Buster a medal for the anti-bullying league at high school. ("Off the Hook")

Retrieved from "https://arresteddevelopment.fandom.com/wiki/Rocky_Richter-Wang?oldid=35198"
Community content is available under CC-BY-SA unless otherwise noted.