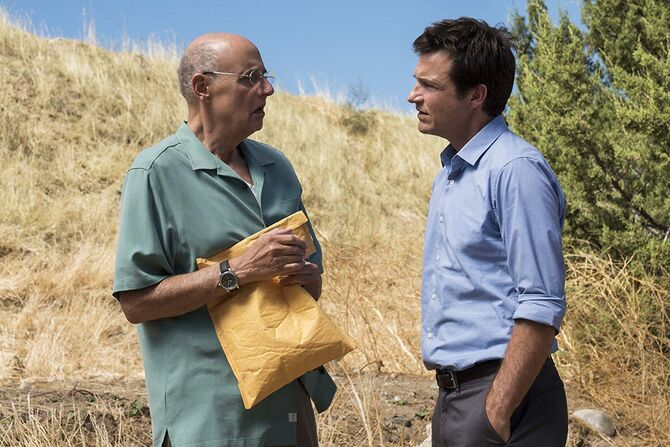 "Rom-Traum" is the seventh episode of Arrested Development's fifth season.

Michael and the family attorney visit Buster in jail. Michael tries to calm Buster down because he thinks that Lucille thinks that Buster had something to do with Lucille 2's disappearance. Michael says that Lucille probably knows where Lucille II is. Michael says that they should leak to the DA that Lucille or George have evidence regarding Lucille II. That way Michael can follow them if they react and see what they know. Barry tells them to say that they are close to finding the stair car. Michael group texted the family to meet at the cottage which included George Michael. Maeby asks him how it went at the BBQ and George Michael says that he thinks that he really does like Rebel. Maeby tells him that she and Stan are dating but have to wait until after the election to be intimate. This is because his daughter Sally has entered into the race as well. George Michael tells her that that can't happen because she isn't really a 67-year-old woman. Maeby claims that he's jealous. Michael tells Lucille that if she isn't going to bail out Buster then the least she can do is go visit him.

Lucille says that it could be very bad for Lindsay's campaign if she goes to see Buster, especially now that Sally has entered the race. Lucille says that Tobias better find her before the 4th of July parade. G.O.B. brings up the Bluth float and tells them that he isn't doing magic on their float because he's doing it on the Laguna Closet Conversions float. He's only doing it because he thought that that's where a person went for conversion therapy but he didn't do a lot of research. He tells the guys that work there everything about him and Tony. He realizes too late that really all they do there is make closets. G.O.B. tells them that they work for the Bluths now because he bought the company. Michael gets a call from Barry telling him the fake news about them finding the stair car and being closer to finding Lucille II. Lucille and George suddenly have to talk alone together which is suspicious to Michael. He goes to the parking lot but George Michael follows him. George Michael tells him that he can loan him the 50 grand to get Buster out. Michael tells him no and that it went up to 75 because Buster strangled a skinhead. Michael also tells him to be careful now that he has a company because people might try and use him. Michael asks George Michael why he dyed his hair and George Michael lies and says because he wanted Rebel to think that he was cool. George Snr walks by and gets into his car telling Michael that he has personal business to take care of. Michael gets into his car and follows him. George Michael gets suspicious as well and decides to follow Michael. Barry shows up at the cottage to see if their scheme worked but Lucille tells them that they figured out their little trap. It's revealed that Barry has a picture of Lucille II and Oscar in a car. Lucille tells Barry to go find George because she isn't going to let Lucille II steal everything that she's taken from her. George Michael calls Maeby and tells her that he's following Michael and that he thinks that Michael is going to see Rebel. Maeby meanwhile is sorting through Stan's medicine trying to find something that will kill his libido.

G.O.B. gets convinced by the closet guys to do a trick with Tony. George Snr. gets to the Mexican border. Michael is two cars behind him with George Michael being two cars behind Michael. George Snr heads to Father B.'s Colony and Michael realizes that this would be where they'd hide Lucille II. Michael confronts George Snr telling him that he knows Lucille told him to keep Lucille II hidden. In fact, Lucille really just told George that she was going to be seeing Dusty later and didn't want him to see her with him. Michael asks him then why is he out at Father Bs. George says because that's where the curse started. Tobias shows up dressed as a native american because he got a job delivering mail for the day. He got this job from Marky Bark's mom. Tobias gives George a package which has estrogen pills inside. Michael realizes that for the past two years his Mom has been giving his Dad estrogen pills which is why he is the way he is. George Michael arrives but when he doesn't find Michael with Rebel he runs to get back into his car but Barry then arrives. He manages to get past Barry and jumps in his car and leaves but not before Michael sees him. Thinking that it's Lucille II, Michael, George, and Tobias give chase. They don't notice the spike strips on the ground and so they all get flat tires. The cowboys arrive and say that they are Romeny land and that they are the Mexican Romneys. They show a paper that Tobias signed as he pretended to be George so that he could hand over the land to the Romneys. George tells them that he never signed anything and that he's gonna fight this but then the Romney's pull out guns. Instead, George asks where does he sign.

Retrieved from "https://arresteddevelopment.fandom.com/wiki/Rom-Traum?oldid=54716"
Community content is available under CC-BY-SA unless otherwise noted.