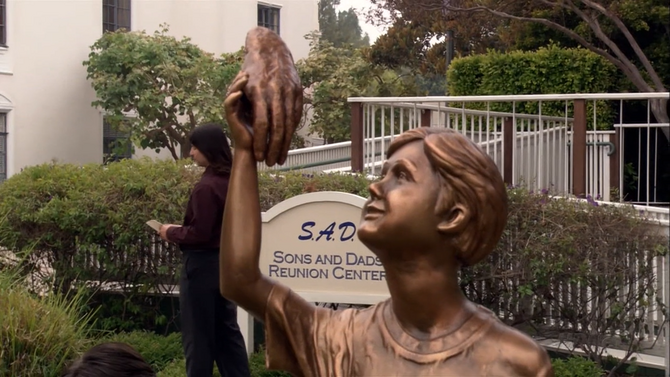 S.A.D. is the Sons and Dads Reunion Project
Appearances: "The Cabin Show", "Notapusy"

S.A.D. or the Sons and Dads Reunion Project is a group that reunites sons and dads. Steve Holt reached out to S.A.D. to contact his father, but G.O.B. didn't read the letter and assumed it was George Bluth who reached out to him. Both Steve and G.O.B. were disappointed that their fathers didn't show and decided to go on a son-son camping trip. ("The Cabin Show")

The S.A.D. statue is later seen when Steve and Michael train for their triathlon. ("Notapusy")

Add a photo to this gallery
Retrieved from "https://arresteddevelopment.fandom.com/wiki/S.A.D.?oldid=32522"
Community content is available under CC-BY-SA unless otherwise noted.