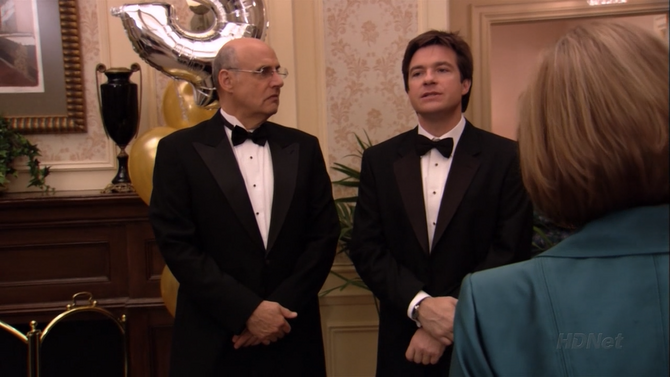 "S.O.B.s" is the ninth episode of Arrested Development's third season.

The Bluths try to save themselves with a party featuring Andy Richter, whose quintuplet brother teaches George Michael; G.O.B. accidentally lands a job.

The Bluth family was sitting at a meeting at the company offices after losing Bob Loblaw as a lawyer. Michael told the family that if they want to keep going for the next few weeks, they must get a new lawyer and "pull out all the stops." They need $100,000 to retain their lawyer. Lindsay then mentioned that Maeby has been accepted at a new-age feel-goodery known as "Openings". She had even sent in the check. Michael suggested that everyone get a job to raise money for the family. He suggested that Lindsay do all the housework at the model home to pay off her debt. G.O.B. and the rest of the family ridiculed Michael for suggesting this. George instead suggested that they hold a legal defense fund dinner in order to raise money - a "Save Our Bluths" event.

Later, Michael arrived at the model home to find Lindsey actually cooking and cleaning. Lindsay, not really knowing what to do, was making "hot ham water." Lindsay suggested that George Michael should also go to "Openings", so that he can properly express his feelings. George Michael walked in to the kitchen to take a break from his SAT preparation and get a cream soda. Lindsay offered to get one for him, but George Michael nervously hurried to the fridge to get it himself. He also checked the stove. Tobias then told Michael that George Michael has been acting strange. We then see how George Michael was constantly cleaning and checking things. Tobias believed that George Michael had obsessive-compulsive disorder because he was afraid to express himself. The truth was, though, that George Michael was simply cleaning up after Lindsay, who wasn't doing a good job cleaning and cooking. Lindsay again recommended "Openings" for George Michael and gives Michael a letter showing "how great" she was doing. Lindsay and Tobias, not having read the letter, are surprised to find out that Maeby hasn't been attending classes and was going to be expelled. They both thought it was a boarding school. Maeby had actually been working at the studio the whole time, filming her film "Snowboarding School 2" on location. Michael was annoyed that the non-refundable tuition is gone, and Lindsay, trying to act like a traditional parent, quipped that Maeby should be punished. Michael then decided to send George Michael to "Openings" instead.

Meanwhile, Lucille was soliciting for the Bluth fundraiser at the club restaurant. G.O.B., who was also at the restaurant at the time, decided to play a trick on Lucille by pretending to be a waiter. Lucille never looked at her waiter, so she didn't know that G.O.B. was playing a trick. G.O.B. kept his charade up until Lucille would notice, but the other waiters thought he was a waiter. Lucille left the restaurant not knowing G.O.B. was there.

At the penthouse, Michael came over to discuss the plans for the fundraiser with George. Michael remarked that the "Home Builders Organization" would not support them, so they had to put on a show during dinner. They decided to invite a celebrities to the event. George also told Michael to write a speech for the restaurant. Michael then told George how Andy Richter's brother teaches at "Openings", so it may be possible to have Andy Richter come to the fundraiser. George also advised Michael not to send George Michael to "Openings" because they will poison his mind. George also poisoned the teachers at "Openings" by sending them poison muffins.

At "Openings", George Michael was asked to express himself in an essay for an assignment. It was also revealed that his teacher, Donnie Richter, is just one of five quintuplets, with Andy Richter being one of the others. At the house, Tobias, who was trying to enforce some discipline, confronts Maeby about not going to school. Tobias told Maeby she has to help him make some gift bags to send to casting director if she doesn't want to go to school.

At the country club, G.O.B. found out he accidentally worked a day after he received some tips. Lindsay and Buster were bonding in the model home, when Buster wandered over to get some food, since Lucille didn't leave him any. Meanwhile, George Michael was struggling to write an essay criticizing his father, so he asked Maeby for help. George Michael tricked Maeby into writing his essay for him.

The next day, Michael went to "Openings" to see how George Michael was doing at his new school. He found George Michael reading the essay in which Maeby criticized Tobias, and thought the criticism was directed at him. G.O.B. continued to work at the restaurant, and began flirting with the women to garner better tips. He unknowingly began flirting with Lucille, and they both are disgusted when they realize what has just happened. Michael then went to confront Donnie Richter about poisoning George Michael, but ran into Andy Richter, who agreed to go to the Bluth's fundraiser. He then threatened Donnie Richter about his son. Michael then decided to pull George Michael out of "Openings", while George implicitly said he will poison Donnie. Lucille, mad that G.O.B. is a waiter and that Lindsey is a "housewife", said she doesn't want them to come to the dinner. Maeby, tired of spending time with Tobias, arranged for him to get a bit part in a movie.

Michael, meanwhile, told George Michael he can't go to "Openings" anymore. Then, George Michael reveals that Maeby had written the essay, not him. Michael then flip-flopped and said George Michael must return to that school. Rocky Richter, the stuntman Richter, then confronted Michael about poisoning Donnie. George Michael was angered about this, and he was also mad that Michael never listens to his opinion. Over at the penthouse, Lucille was panicking because the caterers refused to come because she had run up a high balance at the clubhouse.

The party began and several celebrities were in attendance. Lindsay, who was doing the cooking, was making some dubious dishes. Andy Richter, pretending to be Emmitt Richter, refused to sing. George also accidentally revealed to Michael that he was the "muffin man", and that he poisoned Donnie. George Michael then apologized for criticizing his father, and then Michael began his speech. Michael then gave he speech in which he said that "maybe the Bluths are not worth saving." He then told everyone that he threatens people and that George poisons them. All of the guests rushed out in a panic upon hearing this. The food was bad, the gift bags ridiculous, and the speech was disturbing, but it was still one of the better dinner parties the Bluths had thrown.

In the "On the Next Arrested Development" segment, it is revealed that checks have been pouring in from the attendees of the party. Lucille believes this to be a result of the family not looking desperate. In reality, it was likely due to the many explicit and implied threats that Tobias, Michael, George, and G.O.B. inadvertently make as the guests are leaving. 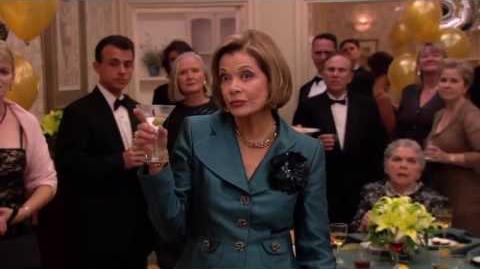