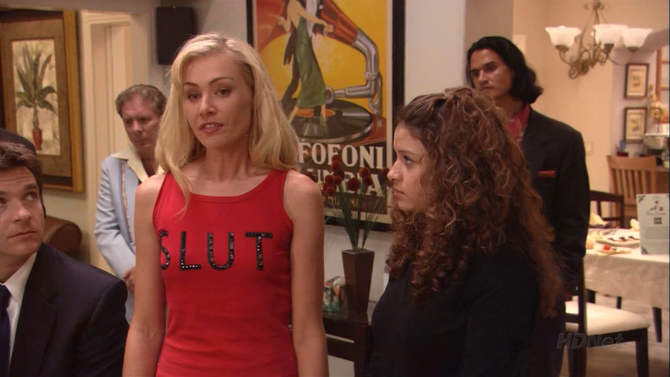 When Lindsay wasn't receiving the attention she thought she deserved from inmates at prison she bought a "SLUT" shirt to turn some heads.

Lindsay wears the SLUT shirt to visit her father in prison, after her first two attempts to arouse the inmates' attention failed. She wears it without a bra. She didn't know her father was paying the inmates off so they wouldn't harrass her. ("My Mother, the Car")

She later wears a Shémale shirt which is very similar. ("Sad Sack") She wears the SLUT shirt in George Michael's campaign video. ("The Immaculate Election")

When prosecutor Wayne Jarvis shows Michael the picture from the rehab security camera the shirt can be seen being worn by the Hispanic girl claiming to be Lindsay Bluth Fünke . ("Exit Strategy")

Retrieved from "https://arresteddevelopment.fandom.com/wiki/SLUT_shirt?oldid=50279"
Community content is available under CC-BY-SA unless otherwise noted.