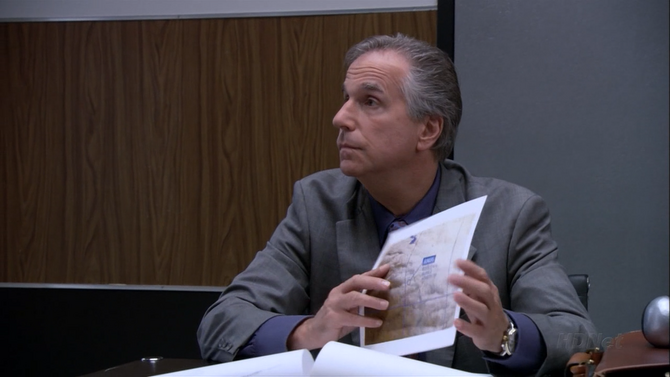 Michael and the prosecution

As Michael cooks eggs for his father who is hiding in the model home's attic he is put off by his mother's flirtation toward Oscar. In the attic George tells Michael that if Lucille really loves Oscar he'll flee the country for good. He also stresses that he was a patsy and was set up for his alleged crimes. At the Bluth Company offices Michael meets with the new prosector Wayne Jarvis, former attorney for the Bluth family. He offers Michael immunity if he turns in his father.

Michael weighs his options and lies to his father, telling him that Lucille is not in love with Oscar. Wayne Jarvis then reveals a picture discovered on the Bluth company email server of an Iraqi landscape with bunkers, proving the existence of WMDs. Michael decides to go talk with his father but he has snuck out wearing a wig and posing as Oscar. Finding out he isn't loved by Lucille anymore, a dejected George returns to the attic and tells Michael to turn him in.

Michael refuses to tell Wayne about George's whereabouts and Barry reveals that the photo is a close-up shot of testicles. Tobias had inadvertently photographed himself with a new cameraphone. Back at the attic, George thanks Michael for not turning him in.

During their open relationship experiment, Lindsay becomes jealous of Tobias who has been frequenting the gym. Hoarse from going to singles bars, Lindsay flirts with Steve Holt as he delivers a gift basket to Maeby, who is also smitten by him. At the high school Lindsay interrupts Maeby and Steve again to flirt. When she leaves Maeby convinces Steve that her mother is a transvestite.

Steve continues to talk and express interest in Lindsay, merely because he finds her so fascinating. Lindsay overhears Maeby talking to George Michael about Steve and decides to back off. To get back at her, Maeby makes her mother a Shemale shirt.

George Michael and the glasses

After getting a B on a math test due to flirting with Ann, Michael decides to get George Michael a new pair of glasses. George Michael is indecisive at the eye doctor and ends up with a bad prescriptions for glasses he doesn't need. The glasses make it harder to learn and he gets a C on the next test. George Michael tells his father who allows him to stop wearing them.

Buster and the Army

During Army boot camp, Buster can't make it over a wall. Due to a recent lawsuit ARMYMAN can't motivate Buster via verbal humiliation. Buster attempts to get G.O.B. to motivate him over the wall but G.O.B. is dejected due to being deemed useless by the prosecution.

After discovering the WMDs the army reserves were called out without Buster. Motivated by the discovery, G.O.B. urges Buster to climb the wall and punches him in the gut.

Retrieved from "https://arresteddevelopment.fandom.com/wiki/Sad_Sack?oldid=54780"
Community content is available under CC-BY-SA unless otherwise noted.