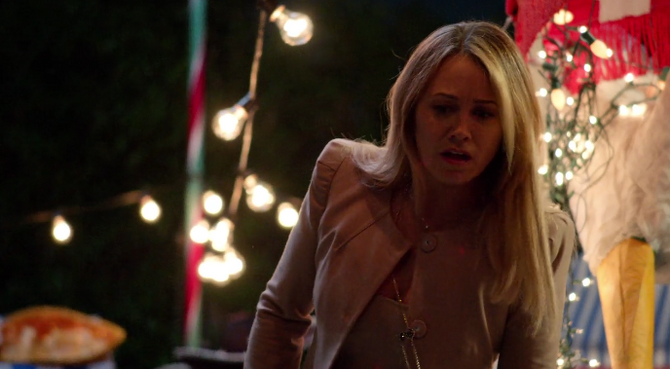 Sally Sitwell is the daughter of real estate mogul and Bluth family rival Stan Sitwell. She and Michael Bluth have known each other since childhood and, if not for Michael's impotence as a teenager, they might have ended up as childhood sweethearts.

Sally worked at Lucille Austero's campaign manager for her 2012 Congressional run and took over her seat when Lucille disappeared.

As young teenagers, Sally Sitwell and Michael Bluth were very flirtatious. George Bluth tried to use this against Sally's father Stan Sitwell which in turn made Michael nervous and awkward. ("Burning Love") Sally was also high school rivals with Lindsay. ("Queen for a Day")

As adults, Sally and Michael briefly dated before he left her to be with the pregnant Maggie Lizer. ("Out on a Limb") Years later Sally began dating magician Tony Wonder, and had stolen money from Lucille Austero to bolster his career as the 'gay magician'. ("A New Attitude")

Sally, like her father, has alopecia. Tony mentions that he keeps finding caterpillars and moths in drains (her eyebrows) and Sally mentions that she's never shaved her legs. ("A New Attitude") Despite this, Lucille 2 still appreciates her long blonde hair. ("Red Hairing")

As children, George tried to intimidate Stan Sitwell by implying that Michael was going to "stick it" to his daughter Sally. This made Michael nervous and although Sally was very flirtatious with him, it never went anywhere.

In 2004, while filling in for his son at the banana stand Michael was approached by Sally. She attempted to flirt with him but G.O.B. appeared and tried to impress her with an illusion but instead squirts her with lighter fluid. She left and G.O.B. insulted Michael for being too chicken to go after her. Michael planned to "accidentally" meet her at the country club where he was humiliated by having to wear an oversized jacket and dining with her father, G.O.B., and Lucille Austero.

G.O.B. attempted to help his brother score a date with Sally by setting her car on fire, instead Michael passed out due to smoke inhalation and was taken to the hospital. At a bachelorette auction Michael traded Stan Sitwell his corvette for $15,000 so he could buy Sally. When Sally found out, she told Michael that she'd rather date someone her father didn't approve of. ("Burning Love")

Michael tried to set up a date with Sally by visiting the Sitwell Enterprises office and thought he saw her, even though he was told she was out. He had really seen her father wearing a blonde wig, looking like Edgar Winter. ("Ready, Aim, Marry Me")

Nevertheless, Michael and Sally began seeing each other. Michael broke the news to George Michael who is happy for his father. Michael then found out that Maggie Lizer was pregnant and assumed the baby was his. He told Sally that he needed to see if the child is really his. Sally then broke up with him. ("Out on a Limb")

On the night of Cinco de Cuatro, a drunk Michael ran into Sally atop the Austero Bluth Company's stair car with Lucille Austero. Sally sarcastically mentioned she missed out on marrying him years ago. (4x1 — "Flight of the Phoenix")

On the same night of Cinco, Lindsay asked Lucille Austero to be appointed her campaign manager for her 2012 Congressional run against Herbert Love. Lucille 2 told Lindsay that the position had already been given to Sally, whom had also beaten Lindsay in student council elections in high school. Sally then showed Lindsay photos of her and Love together and told her Lucille 2 was definitely going to use them to sink Love. (4x8 — "Red Hairing")

Sally and her boyfriend Tony Wonder lay in bed, contemplating plans of how to ruin G.O.B.'s magic career. Sally mentioned that she stole $100,000 from Lucille 2's campaign to rebrand Tony as the gay magician. After mentioning that she'd never shaved her legs in her entire life, she scratched her forehead and her eyebrow momentarily fell off her forehead. (4x11 — "A New Attitude")

After Lucille Austero disappeared, Sally told the press they were still holding out hope for her return while the stair car was being repainted with "Vote for Sitwell". (4x12 — "Señoritis")

Retrieved from "https://arresteddevelopment.fandom.com/wiki/Sally_Sitwell?oldid=54103"
Community content is available under CC-BY-SA unless otherwise noted.