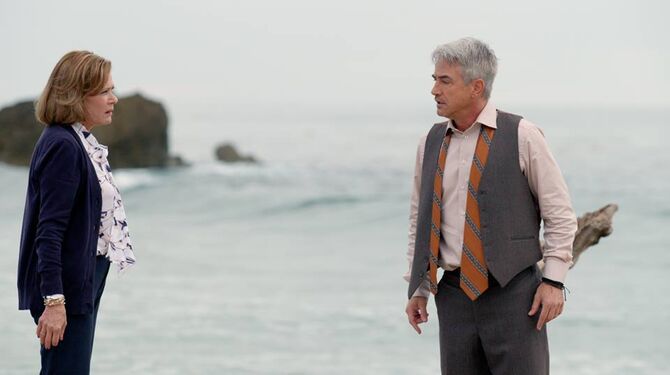 "Saving for Arraignment Day" is the fourteenth episode of Arrested Development's fifth season.

During the 1982 Mr. and Mrs. Bluth pageant at the beach house, the kids parade in their swimsuits in front of their parents. Gob is wearing Stan Sitwell's eyebrow for a fake Magnum P.I. mustache. Lucille's mother Mimi arrives. Mimi mentions Lindsay's upcoming birthday. Lindsay thinks she's turning 14, and Mimi humors her. Lucille says they haven't seen Mimi in five years. Mimi says that she started the family pageant tradition, and she offers a prize for the pageant.

Lucille and George have already bought the trophy for the prize; it's a little magician, meaning they already plan on Michael winning with his magic kit. Mimi's prize is to take a cruise with Lindsay. Lucille tells the kids to go get ready for the talent portion. Mimi usually takes cruises with Uncle Jack, but this year he dumped her for his 80th birthday. Lucille tells Mimi she can't take Lindsay on the cruise, but Mimi hints that Lindsay will be old enough soon to make her own decisions. She jokes that Lucille is making Buster a murderer, and asks to be a judge in the pageant. The camera focuses ominously on the stairs.

In 2015, George and Lucille arrive in court for Buster's arraignment hearing. Lucille complains that Buster never showed up to her trial for hijacking the Queen Mary. Buster has the black fake hand again and claims that he's growing dreads now. Lucille mentions that Buster ordered a new hand from Alibaba (a Chinese website). Michael arrives and Barry goes to wait for the Guilty Guys. Lucille wonders why Michael isn't working on the wall. She guesses that George Michael punched him again, then that he fired him. Michael says that Gob's working on the wall; he told his brother about the foot threat but asked him to keep mum about it. Gob misunderstood, though, thinking that "mum" was the Chinese word for a severed foot, and he tells George Michael all about it. Gob also mentions being threatened by the Gay Mafia at a rock quarry.

The Guilty Guys arrive and enter a plea of guilty. Michael tries to change the plea to not guilty. Barry says that these lawyers are for guilty people, to get the best sentence; they don't represent innocent people. He doesn't know why Michael paid them for two months, which is their longest case ever. Barry asks the lawyers to stay for a not guilty plea, but they refuse. Later, Barry tells George and Lucille that Lottie Dottie wants to go to trial within a month. She's only lost a case to her ex-husband Dustin Radler. Lucille decides to hire Dustin and let him move in with her. George doesn't want her to, but Lucille insists they have to for Buster.

At Fakeblock, Maeby complains to George Michael about Tobias living with her and repeatedly getting her into trouble at the Spotted Palm. George Michael says she should ask Tobias to move out, but Maeby says it's hard, like when Michael moved into the dorm with George Michael. Maeby considers doing a vote to evict Tobias, but warns George Michael that the gang will try to move in with him at Sudden Valley. George Michael tells her about the ongoing construction of the wall. Maeby can't believe he's doing that, and lectures him on the wall "like a slightly self-aware Aunt Lindsay" while he's trying to protect the family like a "minimally woke Uncle Michael." He doesn't tell her about the Chinese threat, so she assumes that he's building the wall out of guilt for firing his father. She storms out, saying he'll be guilty of fraud and should hire the Guilty Guys.

At the beach house, Lucille hires Dustin and gets him to move in. He's eager to confront Lottie Dottie and make her jealous of Lucille. Weeks later, Michael calls Buster in prison and learns about the family plan to get Lottie Dottie to ask for a mistrial. Michael wants to take over the case, even though he's not a real lawyer. He got some money from renting out the beach cottage to a film crew, so he wants to hire somebody different. Buster complains about Michael always trying to be the hero. Michael thinks he has proof that Lucille Austero is still alive because she called him after Cinco. He listens to his voicemails and realizes they are just robocalls, so he finally agrees to go along with the Dusty mistrial plan.

At Fakeblock, George Michael wants Gob to create a distraction at the wall unveiling, so he convinces Gob to do a magic show. Gob hopes to lure Tony Wonder out of hiding, then go back to being straight without angering the Gay Mafia.

The night before the trial, George learns from Lucille that Dustin ran off. Earlier on the beach he flipped out about writing his opening statement. He's nervous about coming out of retirement and he fights with Lucille about Buster. Dustin tries to rejoin his beach gang at their fort, but they reject him for his haircut and suit. Dustin apparently heads back to his home, which he usually does, due to Lucille withholding physical affection. George remembers a 1988 tax evasion case when Lucille gave him a present to get rid of his pre-trial jitters. For Buster's sake, he suggests that she do that for Dusty, even though the "present" is sexual. Lucille goes to Dustin's house and discovers that he's very wealthy with lots of servants, and now she really wants to have sex with him.

On the next AD, Maeby as Annette votes herself out of the condo and packs up to leave. She discovers something that Stan Sitwell left behind, a map with several people crossed out who disappeared from the Spotted Palm. Lucille Austero's picture is circled. Maeby just decides to move into a vacant condo.

Retrieved from "https://arresteddevelopment.fandom.com/wiki/Saving_for_Arraignment_Day?oldid=54725"
Community content is available under CC-BY-SA unless otherwise noted.