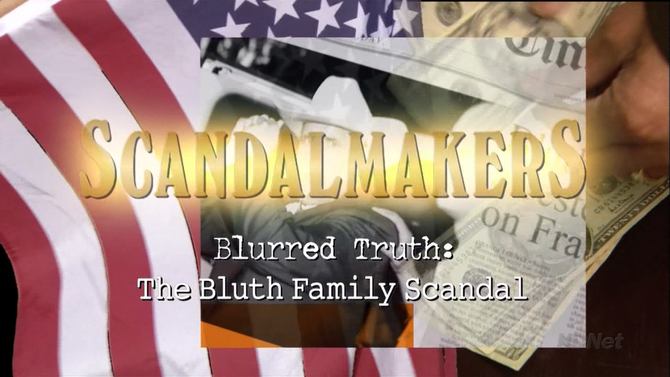 Scandalmakers is a television show that features re-enactments of real life scandals. One episode deals with the events surrounding the Bluth family, called "Blurred Truth: The Bluth Family Scandal". The Narrator suggests that Scandalmakers' is poorly narrated.

The episode is broadcast, leading to Cal Cullen being hesitant to make a deal with the Bluth Company, as well as leading Kitty to discover George in the model home's attic. Mr. Bananagrabber (as well as pictures from the show's opening) are seen in the opening credits. ("Spring Breakout")

A flashback to Tobias portraying George Sr. is shown when Tobias is asked by the FBI to "capture" George Bluth. ("Mr. F")

Narrator: Due to poor acting, the burden of the story was placed on the narrator.

Scandalmakers Narrator: ...only to be found hiding under one of the homes that he himself built.

Narrator: He was actually found in a hole near the house, but this inattention to detail was typical of the laziness the show’s narrator was known for.

Tobias: I cannot survive under the house. Perhaps an attic shall I seek.