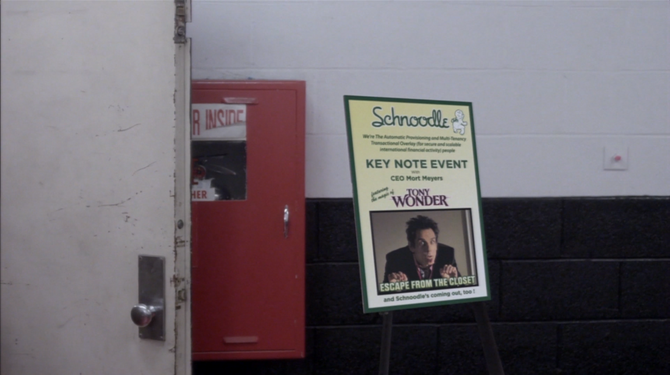 Schnoodle is a financial technology company formed by Mort Meyers (who serves as CEO) after he was fired from Tantamount Studios.

Tony Wonder performs his Escape from the Closet Illusion at the Schnoodle launch on April 20, 2012. G.O.B. attempts to lock him in his compartment by jamming part of an Opie Award into a podium. Tony Wonder succeeds in his illusion because he came out of a prop speaker instead. (4x7 — "Colony Collapse")

The same night, just minutes prior Mort tells Maeby that he was fired from Tantamount Studios for passing on the Hunger Games film and started Schnoodle to save face. He describes it as a "system that automates provisions" and is a "multi-user overseas financial transactor". Maeby is too impressed to understand what it means. (4x12 — "Señoritis")

When Marky Bark's glitter bomb detonates it knocks out The Century Plaza's power, causing Schnoodle to somehow fail, destroying the company instantly. George Maharis is credited for causing the accident "just because he could". Mort is later given a job at Fakeblock. (4x13 — "It Gets Better")

Mort Meyers: It's the real deal. It's a system that automates provisioning [...] multi-user overseas financial transactions. It's called Schnoodle.