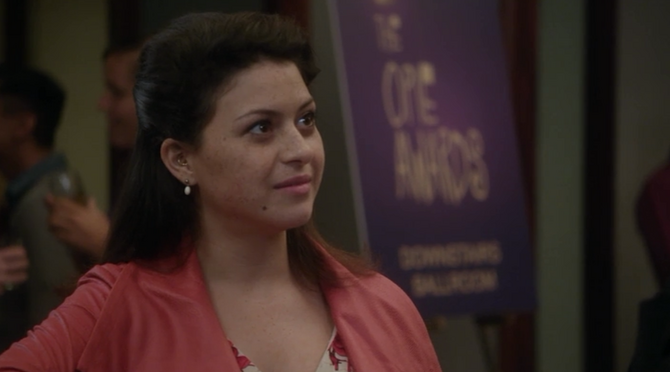 "Señoritis" is the twelfth episode of Arrested Development's fourth season.

Maeby moves out on her own and reconnects with her cousin, George Michael.

After Lucille capsized the Queen Mary, Maeby attempted to get her parents attention by pretending to be dead at the harbormaster's lodge. They didn't notice her so she planned on failing out of high school to teach them a lesson. They went to India on a spiritual journey so she resumed work on the Bluth family movie she pitched to Ron Howard. She was given a job at Imagine Entertainment as a film producer where she in turn gave Kitty a job to help with the project. Maeby went to India to film Gangie on the Ganges and saw her mother. Maeby put on Hollywood makeup and talked to Lindsay as her shaman.

Upon returning home, Maeby was fired from Imagine because Kitty discovered she didn't have a high school diploma. Maeby then returned to her parent's new lavish mansion where she couldn't teach them a lesson with her failing out of high school due to the house's large size and her parent's complete ignorance. When the housing market collapsed, Maeby snuck in to live in Balboa Towers but left when Lindsay and Marky Bark moved in with Cindy the Ostrich. She moved into the model home where there was no internet so she went to the high school to use the internet and found herself there for several years, repeating her senior year.

In 2013 Maeby ran into George Michael in his dorm room while being tutored in algebra. She overheard his Fakeblock idea and decided to turn it into a business when she realized that receiving an Opie Award for Lifetime Achievement meant her entertainment career had died. She was also approached by Herbert Love's assistant to pimp Lindsay out when he overheard Maeby call her mother a "whore". She continued to go to high school and date Perfecto Telles until she saw him in a bar and determined he was an undercover cop. Maeby asked Barry about the legality of her presence in a high school and Barry was 100% positive it was illegal for anyone 21 or older to be on school property.

After getting many investors, including Lucille Austero to invest in Fakeblock, she was fired by George Michael. Herbert Love then called off his affair with Lindsay. She successfully seduced Perfecto and at Cinco de Cuatro she tried to use their intimacy as blackmail to get him kicked out of school. However, he turned out to not be a cop and was only 17, so she was arrested by Rocky Richter-Wang (the actual undercover cop) for being a sexual predator.

In the chronological re-cut of season 4, footage from Señoritis is used in 10 different episodes. The original cut of Season 4 is slightly longer than the re-cut version. Because of this, various lines of dialogue and sometimes even scenes are cut. These changes, as well as which scenes appear in which remixed episode, are listed below:

Maeby: And if you do my Spanish, I'll teach you how to French.

Maeby: Shh! I'm trying to get my parents to notice me. I've been here for like an hour and a half.

Narrator: It had been seven minutes.

George Michael: Do you think it would help if I went over and said like, "Hey, Maeby's dead"?

Maeby: No, that would just mean that they'd notice you.

Maeby: What are you doing here?

Barry: Well, I could ask you the same thing.

Barry: I could answer the same thing. I was just looking for something more believable.

Maeby: Thank you, Kirk Cameron, for that incredibly Bible-y introduction. Okay, so, tie yourself to your chair, because this is going to be a rough (BLEEP) ride. I'm leaving this (BLEEP) dying business to join the software game. Double (BLEEP) newsflash! I'm starting Fakeblock with George Maharis. The world's first anti-social network. So you know what? You can take this Opie and shove it up your (BLEEP), all right? Because I will (BLEEP) punt the next god(BLEEP) (BLEEP) you tells me I'm finished, you (BLEEP) (BLEEP)hats! So you can all go (BLEEP) yourselves! (starting to leave) What? Sure. (reads) Please welcome the talented voices of Phineas and Ferb. Go (BLEEP) yourself! (BLEEP) you!

Perfecto Telles: Oh, that's a relief. I wasn't supposed to be driving with you.