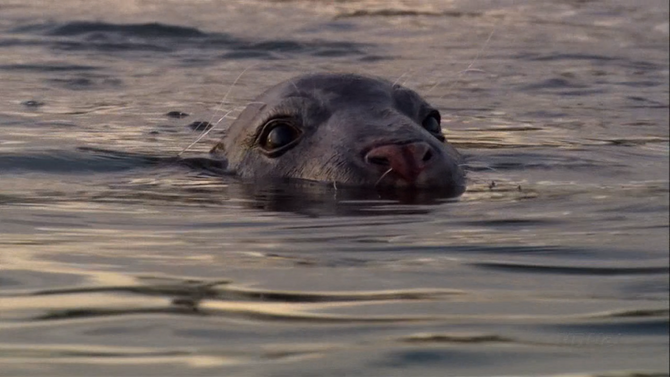 Seals are apparently versatile, but dangerous, creatures that seem to haunt G.O.B. and Buster. There are also numerous plays on the words loose seal and the name Lucille.

When G.O.B. marries his unnamed wife, he can't remember that she is a seal dealer and sells seals to zoos. ("Altar Egos")

While watching TV, Lucille hears John Beard of FOX 6 report on a bather who was attacked by a seal. ("The One Where Michael Leaves")

After ditching Army to play a claw game, Buster wins an arctic seal stuffed animal. Upon returning home he is shamed into lying to his mother. According to Buster, "Army gives out seal stuffed animals for marksmanship." ("Afternoon Delight")

After his wife left to join the Army, G.O.B. began using a seal with a yellow bow tie in his magic act. In one show, a cat was locked in a trunk with the seal, wherein it is presumed to have acquired its taste for blood. Because of this, G.O.B. released the seal into the Pacific Ocean. Buster, waiting for a bus to take him to Army, decided to swim in the ocean as one last act of defiance against Lucille. While swimming, a pedestrian warned Buster of the "loose seal" before Buster's hand was bitten off by the seal. ("Out on a Limb")

After the seal bit off his hand, Buster was rushed to the hospital, where no one believed that a seal with a yellow bow tie really bit his hand off. Tobias mused that they were playful mutterings of a shock victim, and a seal would only attack if it acquired the taste for mammal blood. G.O.B. confessed to Michael they he used a seal with a yellow bow tie in his act. He then attempted to hunt for the seal using terminal cats as live bait, in order to remove the incriminating bow tie. He failed. ("Hand to God")

After Buster receives a medal from Army, Lucille jokes that it was because he was "food". Tobias notices Buster is extremely anxious about seals and attempts to help him overcome his fears. He wears Lucille's sealskin coat to teach Buster that's he not afraid of seals but of Lucille and he shouldn't even fear her. After picking Rita up in the family cabin, Buster knocks her unconscious because she's wearing a seal backpack. This act temporarily helps him overcome his fear. ("Forget-Me-Now")

Buster is afraid to go on the RMS Queen Mary for George's exoneration party due to his fear of seals. At the party, he wears life vests and sits in a life boat, but nevertheless he falls off and is confronted by a seal. ("Development Arrested")

Nellie: What do you say we go up to my room and seal the deal?
From "Family Ties"

When Michael thinks she is a consultant (before he finds out she's a prostitute) Nellie asks Michael to "seal the deal". ("Family Ties")

Lottie Dottie DA mentions all the details of the previous case had been sealed but Warden Gentles believes "all seals can come loose". ("Courting Disasters")

The gentleman collar that Buster wears in the Ron Howard series about him looks like a yellow bow tie, like the one on the seal who bit off Buster's hand. ("The Untethered Sole")

G.O.B.'s wife: Oh, wait, what time is it? Oh, God, seal the deal. My seal deal. I got to get to Sea Land. I’m selling five of their sickest seals to a third world zoo.

G.O.B.'s wife: Unbelievable. The seal deal fell through. Three of the seals died on their way to Chad. How am I ever going to find a maritime lawyer?

G.O.B.'s wife: Yes. I trade trained seals for a living. Do you ever listen?

John Beard: Are you living in one of Saddam’s many palaces? They may have been built by the same developer. And a seal attack. Meet one surprised bather, coming up.

From "The One Where Michael Leaves"
Buster: These are my awards, Mother. From Army. The seal is for marksmanship, and the gorilla is for sand racing.
From "Afternoon Delight"

G.O.B.: Yes, but it’s all coming back to me now. She was a seal dealer. She raised and sold seals to aquariums and marine parks, that sort of thing. Then she went off to fight her war and left me to look after them.

Michael: I’ve never known you to look after a seal.

G.O.B.: Turns out it’s a major hassle. Tried to include one in my act once. There is a reason you don’t typically see live seals in a magic show.

Narrator: ... and Buster is on his way when he decides to pursue a long-delayed rite of passage, ...

Buster: I don’t care about Lucille! She lies!

Narrator: ... and then a seal bites off his hand.

Buster: Actually, I’m relieved. I don’t have to go to Army because the seal with the bow tie attacked me. I feel like I’ve lost three pounds.

Michael: Buster went swimming in the ocean and according to him, a seal with a bow tie bit off his hand.

Tobias: It’s merely the playful mutterings of the shock victim. A seal would never prey on a human, unless, of course, it had acquired a taste for mammal blood.

Narrator: G.O.B. had recently dressed a seal in a bow tie and used him in a magic trick. When it failed, he released the seal into the ocean.

G.O.B.: You’re back in the real world. You’re not going to be hand-fed anymore!

G.O.B.: I mean, how the hell would a seal know how to tie a bow tie anyway? I can barely tie the yellow one that I wear in my act.

Buster: This one had a yellow bow tie!

G.O.B.: I did this. I think that the seal with the yellow bow tie might be the one that I released into the sea after giving it the taste for mammal blood.

Michael: Okay, you’ve got a better case than Mom does.

Michael: Well, they said if you retrieve Buster’s hand, they might be able to do a transplant.

G.O.B.: At the very least, I could remove that incriminating bow tie.

G.O.B.: Looking for the seal that’s got the taste for kitty blood. I’ll pay you handsomely.
From "Hand to God"

G.O.B.: Anyway, remember that seal of hers that I released into the ocean? Bit off Buster’s hand?

G.O.B.: Her lawyers are claiming that the seal’s worth 250 grand. And that’s not even including Buster’s Swatch.

Barry: All right, who’s ready to show their lawyer some love? The seal? Must have had a tracking device on it. Someone tracked it all the way to a dock in Dana Point.

Michael: You know if that hand is still intact inside the seal, Buster’s got a shot at a transplant.

G.O.B.: At the very least, we can get Buster’s Swatch back, right?

Barry: Oh, oh, oh, I’m so sorry. False alarm. What they tracked down was a shark. And he must’ve bitten off the part of the seal with the tracking device on it. Left flipper.

G.O.B.: Yeah, poor guy’s probably out there without a flipper, swimming around in a circle, freaking out his whole family.

Lucille: It’s probably because a seal bit off his hand. The army has taken to giving medals for being food.

Narrator: Buster had overcome his fear of seals. Unfortunately, he’d done so by knocking out Michael’s new girlfriend.

Lindsay: Yeah, but a 40-year-old woman has as much a chance of getting married as does of getting attacked by a shark.

Lindsay: Or a seal.

I don't know where to put this but there's also the part when Gob is releasing the seal, and says "Time to get back in the real world! Not gonna be hand-fed any more!"