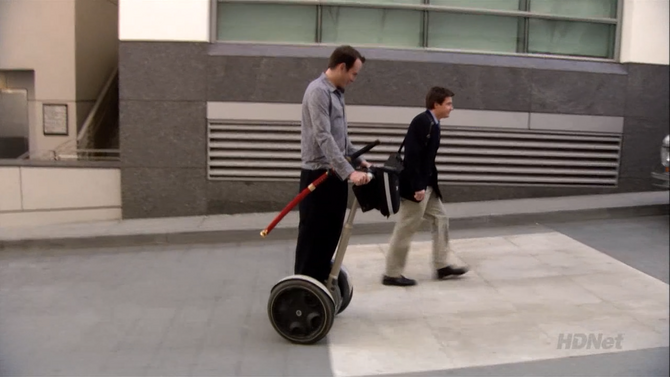 Segway
Appearances: "Pilot", "Top Banana", "Charity Drive", "My Mother, the Car", "Beef Consommé", "Staff Infection", "The One Where They Build a House", "Burning Love", "Sword of Destiny", "Righteous Brothers", "The Cabin Show", "Notapusy", "It Gets Better"

A Segway is G.O.B.'s preferred method of ground transport for most of the time. He is frequently seen using it to get around Newport Beach, whether appropriate terrain or not. When G.O.B. approached on his Segway, he almost always segues the conversation to what he wants to talk about.

The 'Segway' is the butt of a few Bluth family jokes. Lucille tries to run him over in her Mercedes, but it turns out to be another "idiot on a scooter at night." ("My Mother, the Car") Lucille jokes that it's a good thing he has "that little scooter" when Rollo threatens G.O.B.' legs. ("Storming the Castle") After G.O.B. purchases The Sword of Destiny, Michael asks if he's hunting dragons in the future. ("Sword of Destiny")

G.O.B.'s Segway has a pouch on the front of the handlebars which is adorned with his name. When he is made president of the Bluth Company he changes it to read "President", although the "P" keeps falling off. ("The One Where They Build a House") He breaks the kickstand of the scooter (in a "Righteous Brothers" deleted scene) and has to lay it on the ground. ("Righteous Brothers") No one other than G.O.B. has ridden the Segway, except for Steve Holt, who rides as a passenger. ("The Cabin Show")

The Segway is entered into state evidence when Lucille is arrested but is later retrieved by G.O.B. and given to George Michael, who abandons it nearly instantly. ("It Gets Better")