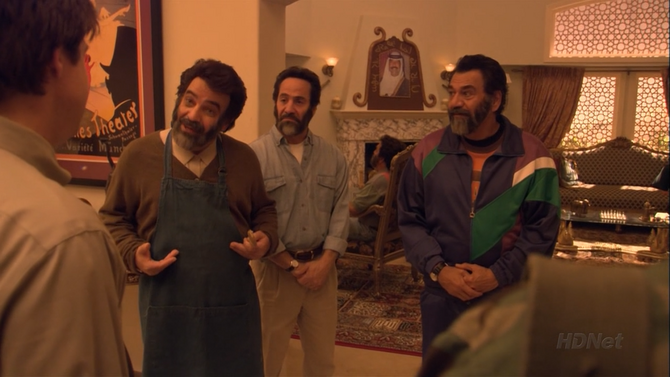 Seinfeld is a sitcom show created by Jerry Seinfeld and Larry David. The show aired on NBC from 1989 to 1998 lasting nine seasons.

It is referenced in Arrested Development several times.

In "Hand to God", there are at least two Seinfeld references. When Michael answers Lindsay's call from the wetlands, his response to Lindsay is "Who is this?", a Seinfeld running joke. In prison, George Sr. mentions a "dentist who took some liberties", referencing Tim Whatley (Bryan Cranston), the dentist in Seinfeld; Jerry suspected Whatley of 'violating' him while the latter was unconscious in "The Jimmy". George says he mistook Saddam Hussein for the 'Soup Nazi' from Seinfeld. ("For British Eyes Only") When the Bluth sons visit Iraq and meet the Saddam Hussein look-alikes, one of them is portrayed by Larry Thomas, the actor who played the Soup Nazi on Seinfeld. ("Exit Strategy")

In "Hand to God," Maggie Lizer prods at Michael that he is "only here for the baby." She pronounces the word "baby" in the same mimicking voice that Elaine (also played by Louis-Dreyfus) used to say the word in Seinfeld when mocking her and Jerry's friends who were new parents.

When the family is trying to decide what to raise money for at the dinner they all take a vote and put a paper into a hat. When George Sr.  reads all the choices, one he reads out "Shrinkage. Ha! Someone watched Seinfeld last night." G.O.B. then laughs. ("S.O.B.s")

When George Michael is checking into the hotel, he says he wants one bed, not two, justifying his choice with the phrase "Why give her the option?" This is a reference to the pilot episode of Seinfeld, on which Kramer advises Jerry not to bring a second bed into his apartment for a woman who's staying with him, asking Jerry, "Why even give her an option?" ("It Gets Better")

Retrieved from "https://arresteddevelopment.fandom.com/wiki/Seinfeld?oldid=55075"
Community content is available under CC-BY-SA unless otherwise noted.