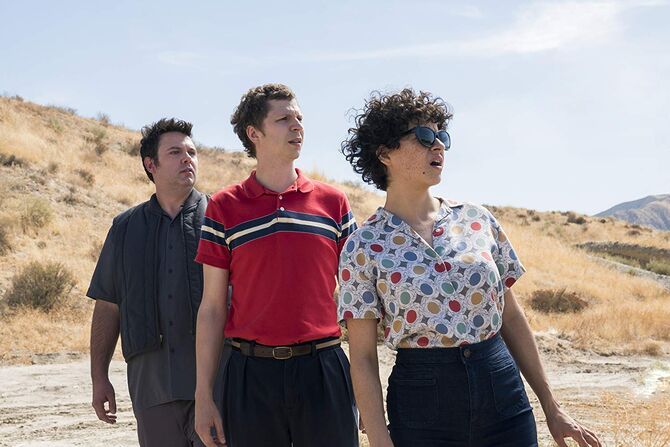 "Self-Deportation" is the second episode of Arrested Development's fifth season.

For varying reasons, most of the Bluths (even Steve Holt) feel compelled to run off to Mexico. Michael tries to convince Buster to go to the police.

Michael goes to Imagine Entertainment, trying to get out of Ron Howard's movie. Kitty argues with him about the release forms he was supposed to get signed, and he says he can't because George Michael is dating Rebel Alley. Kitty mentions that Ron is shooting a movie in Mexico. Michael suggests that she make a movie about Buster instead and gives her all the release forms, including the ripped ones. Kitty doesn't want to do a movie about Buster, and fires Michael, giving him Imagine money to spend in the gift shop. He buys the Ron Howard and Brian Grazer wigs, and still has the red wig from the penthouse. Then Michael returns to the model home, putting off the fumigation and convincing Buster to pretend to be missing in order to trick the family into coming home.

Meanwhile, George Senior and G.O.B. travel through Mexico trying to find their sexual vigor, but they reject even two hot Mexican cousins. Buster reveals to Michael that he saw a dead Lucille lying on the stairs, but Michael still thinks he doesn't need a lawyer. Michael goes to say goodbye to George Michael but instead gets a call from Lucille Austero. He hangs up on her and leaves George Michael a note on his door. He heads to Mexico in his car but is escorted back by Search who owns it. Apparently he makes no move to contact George Michael again or check on whether his plan for Buster succeeded. Michael progresses at Search, getting a new, smaller car, and starting a family-on-family self-defense course.

George Michael goes looking for Michael but finds out that he just missed him. He and Maeby decide to go to Mexico and invite their unknown cousin along. The staircar ends up breaking down near the land for the Father B colony. The cousins encounter some strange cowboys telling them to leave, and the signs now read MRF. Steve Holt decides to go back home, while Maeby and George Michael go in search of a bar. George Michael says that some American students staying in Mexico have invited them to move in, but Maeby's not interested. George Michael confesses about Fakeblock not being real, and Maeby says she already figured it out by snooping on his computer. She is seeking some new goal in life, some new "goop" of her own.

G.O.B and George continue riding in the Winnebago, faking lust for a trash bag and some bushes by the side of the road. Meanwhile, Tobias and Lucille continue to have their therapy sessions but Tobias learns that Lucille wants to discontinue them since he's getting a divorce from her daughter. Tobias wants to stay in the family and tells Lucille his motto of "hurt people, hurt people" but she thinks of it as a variation on her motto "make people cry, make people cry." Lindsay runs into Oscar at a bar in Mexico, but thinks he's her father George.

Maeby tries to hitchhike back to America but accidentally took a ride to the border with some volunteers sent to help those who were displaced. She decides to stay and help distribute water to the less fortunate. George Michael continues to have a good time in Mexico because he is hanging with a bunch of white guys named Noah. Lucille learns that Trump is going to build a wall and have Mexico pay for it. A month later, Michael is still working at Search but decides to return home to pick up scuba gear from the model home. There he sees that he's received a letter from Lucille 2 that says she's forgiven the debt. He goes to thank her in person. While there, he checks on the penthouse but finds that nobody is home. He returns to Lucille 2's apartment and walks inside to find his family waiting for him.

Michael: So we got to wait about 48 hours before we declare you missing and they put out an APB.
Buster: APB? Ahh Poor Buster.

Lucille: How many more sessions do I have to endure till I'm done with - no offense - you?


Tobias: Legally, two. But I am in the family.

Tobias: And maybe you don't want to get hurt because as I say... "Hurt people hurt people."

Lucille: Oh that's nice. I always say "make people cry, make people cry" but yours includes the people who don't want to give you the satisfaction.