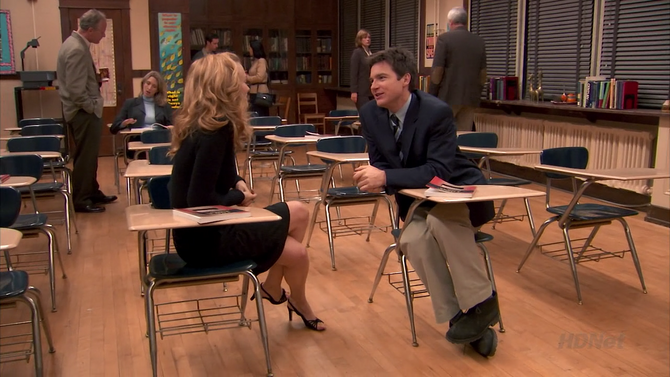 "Shock and Aww" is the fourteenth episode of Arrested Development's first season.

Michael falls for George Michael's ethics teacher, Miss Baerly, whom his son also has a crush on. Meanwhile, Lucille adopts a 14-year-old Korean boy, and George Sr.'s "Caged Wisdom" tapes have given him a new admirer.

George Michael has fallen in love with Beth Baerly, his Ethics teacher. He opens up to his aunt Lindsay but she misunderstands and think he wants Miss Baerly to be his surrogate mother. At parent-teacher conferences at the high school Lindsay tells Michael about Miss Baerly. They are instantly attracted to each other and leave the conference to have drinks and spend the night together at the model home. The next morning, George Michael confesses to Michael that he is in love with Miss Baerly. When he sees her leaving the house Michael lies to him and tells him G.O.B. slept with her.

Michael breaks up with Miss Baerly for George Michael's sake but later regrets his decision so attempts to get back together with her at the school's Diversity Dance. Michael tells his son about his relationship with Miss Baerly to win over her trust again, but she decides that she doesn't wants either the father or son Bluth. Instead she dances with her student Jeremy, much to the dismay of George Michael.

G.O.B., still bitter about Michael stealing Marta, sets Michael up with Nazhgalia on a blind date. At the date G.O.B. mistakes Michael's kindness to Nazhgalia for attraction so he sleeps with her. When he learns that Michael wasn't attracted to her he attempts to steal Miss Baerly but sleeps with Mrs. Whitehead instead. His actions cause him to lose his girlfriend Shannon.

Lucille asks Michael for help with her newly adopted Korean son. She signed up for him a year prior when she was angry at Buster but regretted the decision. However, when she saw how jealous Buster was of Annyong she decided to keep him. She named him "Annyong" after the only word he spoke to her. Buster takes Annyong to the high school to enroll where he meets Maeby who asks him to the Diversity Dance. At the dance, Maeby dumps him for Steve Holt.

At prison, George's new admirer Cindi Lightballoon swoons over his Caged Wisdom tapes. She attempts to get him to admit his sins to her after admitting her own. George, however, is only interested in Cindi for her body. Agent Cummings and Freeling hook a camera and microphone up to Cindi's bra inside a Blendin van but George tweak's Cindi's nipples, thereby breaking the equipment and spoiling the setup.

Add a photo to this gallery
Retrieved from "https://arresteddevelopment.fandom.com/wiki/Shock_and_Aww?oldid=54807"
Community content is available under CC-BY-SA unless otherwise noted.