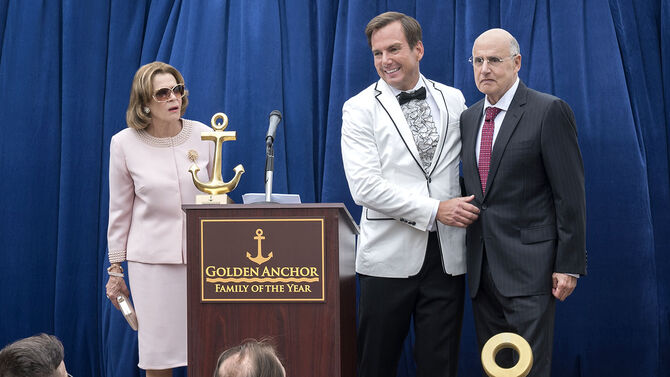 The Bluths receive / present their award but it weighs on George Sr. and creates new problems. Michael and George Michael have a deep conversation.

Michael goes to see Rebel Alley to straighten things out and make sure that she doesn't tell George Michael what he really said. Little does he know that George Michael hasn't seen Rebel since he punched Michael. Little do both of them know that they're each heading there at the exact same time. Michael spots George Michael approaching and hides in a bush. While squatting in the bush, Michael finds the potted cactus that he gave to Rebel. The detective from before finds him in the bush and Michael tries to explain why he's in there. He asks the detective if she knows if they ever found Buster and she says yes that they got him. As the cop walks away, George Michael steps out of the apartment building. He tells Michael that he'll give the cactus to Rebel and Michael asks him if he still doesn't want to go on the scuba trip. George Michael says he can't because he's so in love. After Michael leaves, George Michael rushes back upstairs and leaves the cactus outside of Rebel's door. But just as he's leaving he runs into Rebel who's returned from shooting a small movie in Mexico. He shows her the bag of sex toys he brought to her hoping to scare her away but she says that she has to pick up her son so they have to have a quickie. Michael heads to the boat for his 3-month excursion while the Bluths head to the Bluth's Original Frozen Banana Stand to receive their award. Unfortunately, there is no Banana Stand so Lucille asks Maeby why and Maeby goes to make a phone call. Tobias shows up dressed in a banana suit but since there is no Banana Stand is not needed. G.O.B.'s girlfriend and G.O.B. proceed with the ceremony anyway. G.O.B. gives an incredibly awkward speech dedicated to his Dad. He presents his Dad with the overly large anchor award.

Lindsay shows up n the second outfit she's worn today because Lucille didn't like the first one she was wearing. Lucille still manages to say something mean about this outfit so Lindsay puts a sheet over herself since Lucille can't seem to find anything to like about her. Michael is on the boat for the scuba trip when he decides that he wants to go back. Suddenly, George Michael is on the dock dressed in scuba gear. Because they can't hear each other since the boat is quickly moving away from the dock, they both jump into the water and swim towards each other. They begin to talk to each other underwater but then George Snr. jumps into the water clinging to the anchor award. Michael goes to help him but George Snr. doesn't want any help. Michael finally manages to pull him out of the water. Michael confronts George Snr and tells him he knows they have Buster but George Snr is adamant that they don't. He says that they would never make Michael worry and that's why they forgave the 700,000 dollar debt that he owed. Lucille is up on the podium ready to give her speech. She gives a speech about Lindsay that touches Lindsay. But Lindsay then realizes that the words meant nothing and that she needs to go and find her real family. Maeby kisses George Michael with her meth teeth and suggests that they go kiss again. George Snr. returns and Lucille asks where he's been. He lies and says he was saving Michael from killing himself and reveals to Lucille that he doesn't have Buster either. Tobias comes out pretending to be Buster and gets arrested. Michael comes and tells the both of them that he learned that Buster is in jail. Lucille punches him albeit softly. The Bluths go to the jail to find out what's going on with Buster.

Lucille is worried about what he's told them. Michael tells them that it's going to cost them 50,000 dollars to get him out. Lucille says that he has to pay for it since he was the one trying to teach them a lesson. The police tell them that one of them can go in so Michael does. He talks to Buster who tells him that he told them about Lucille II. He was also arrested because he tried to erase the security tape using George Michael's technology which was fake. Michael asks Buster why he tried to erase the footage and he says because he panicked. Michael tries to reassure him that whatever he said isn't admissible in court unless he waived his rights to an attorney, which he did. Michael gets their lawyer to help them post Buster's bail and the next day they host a party for Buster. They're worried that Buster may be a murderer but Lucille says that Lucille II is fine. George Snr offers to move in with Lucille at the cottage but Tobias encourages her to claim her space. Tobias then reveals that the stand-in for Buster, Murphy, is actually his bastard son. Maeby thinks that he's going to apologize to her for bringing him in but he actually just apologizes to Lucille which upsets her. Buster finally arrives but it isn't Buster it's Barry. Barry actually hoodwinked Michael and had him bail him out instead of Buster. G.O.B. says that the whole situation is hysterical and that Michael made an honest mistake. He hopes that Buster won't kill them for laughing.

Retrieved from "https://arresteddevelopment.fandom.com/wiki/Sinking_Feelings?oldid=54714"
Community content is available under CC-BY-SA unless otherwise noted.