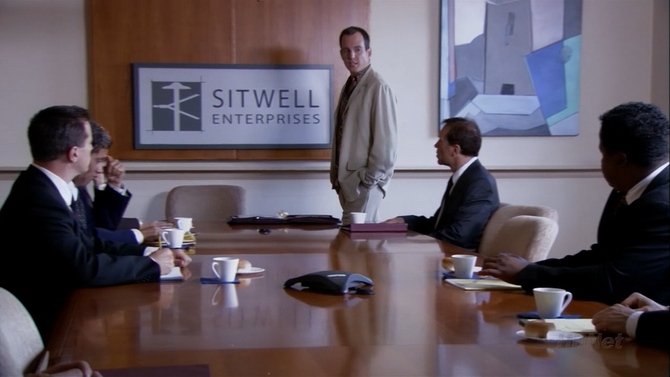 Sitwell Enterprises is the real estate company in Newport Beach, rival to the Bluth Company which is run by Stan Sitwell. It also appears under the name Sitwell Housing Inc.

Michael applies for a job with Sitwell Housing Inc and gets a job in Phoenix. He decides to stay in Newport Beach to help his family. They later turn G.O.B. down for a job. ("Pilot")

Michael is approached by Stan Sitwell, a longtime rival to George Bluth about a potential partnership over the Sudden Valley development. Michael, smitten by the praise and attention he never received from his father is sweet on the deal. G.O.B., however, keeps up the rivalry and tells Sitwell to "screw off". Sitwell hires him on the spot because the deal was lousy.

Michael wants to remain president of the Bluth Company so he gives G.O.B. ideas to feed to Sitwell. George convinces Michael that Sitwell hired G.O.B. simply because he is the best softball player but in the end at a softball match between the Bluth Company and Sitwell Enterprises Stan Sitwell's kindness turned out to be real: he really thought G.O.B. could be a valuable member of Sitwell Enterprises. ("Switch Hitter")

G.O.B. is fired from Sitwell because his ideas fail to evolve. His idea of "Singles City"—a housing development targeted for the singles community devolves into "Fuck Mountain"—a swingers neighborhood. ("Queen for a Day")

Lindsay visits Stan at his office, trying to sell her shares. She learns that she was adopted by George and Lucille and is 3 years older than she previously believed. Aboard the RMS Queen Mary during George Bluth's exoneration party, Lucille Bluth sells the Bluth Company to Stan Sitwell moments before she is arrested by the SEC. ("Development Arrested")

Immediately after buying a controlling share of the Bluth Company Stan Sitwell pawned the 'worthless' shares off on Lucille Austero. ("Flight of the Phoenix") Shortly later, Sitwell Enterprises was approached by the US government to build the US/Mexico wall. ("Borderline Personalities")

Retrieved from "https://arresteddevelopment.fandom.com/wiki/Sitwell_Enterprises?oldid=39369"
Community content is available under CC-BY-SA unless otherwise noted.