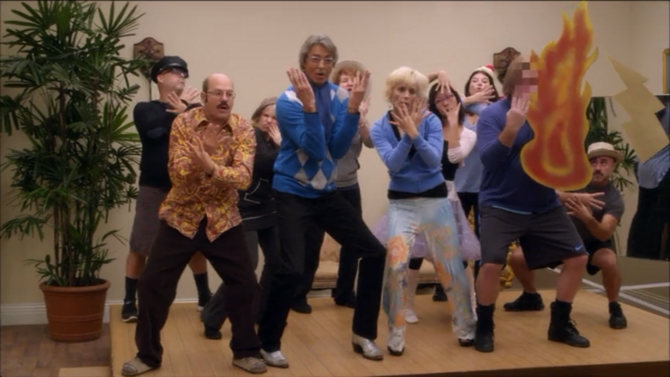 "Smashed" is the ninth episode of Arrested Development's fourth season.

Tobias returns to his roots and reunites with his leading lady after a few rough weeks.

After getting arrested during his appearance on John Beard's To Entrap a Local Predator: Orange County Edition: Super Creep Tobias is sent to prison where he is beaten for being a child predator. He then accept's Lucille Austero's offer to work at her family's Austerity clinic on a work-release program. At the clinic he meets Mark Cherry and Emmett Richter and is most surprised when he discovers that DeBrie has also been admitted to Austerity.

The director of Austerity, Argyle Austero refuses to let Tobias be DeBrie's therapist so Tobias appeals to Argyle's love for musical theatre by suggesting they put on a Fantastic 4 musical. Tobias returns to the model home to retrieve some belongings and he finds a dejected G.O.B. and ends up buying a Bluth home. He returns to Austero and begins rehearsals for Fantastic 4: An Action Musical with Mark Cherry writing the music. DeBrie is frightened of the spotlight but Tobias eggs her on. Tobias then suggests to Argyle that they should ask Lucille 2 for $700,000 to do a really spectacular show. Argyle agrees if Tobias can in exchange get the rights to Fantastic 4.

At The Ealing Club, Rebel blows Michael off and Michael, upset that Herbert Love frightened her away tells Lindsay that she's out of the movie. He then runs into the Austero siblings who call in his $700,000 debt. The next day Tobias heads to the model home where Michael tells him about Rebel and Tobias suggests asking Ron Howard directly for permission to see her. They head to Imagine Entertainment and Michael awkwardly asks if he can have Rebel but Ron, being Rebel's father and not her lover like Michael thought, is so put off by Michael he swears to make Rebel not date Michael. Tobias then asks for the rights to Fantastic 4 and when refused attacks Ron Howard. Michael then obtains his film rights and rips them up immediately.

As the show starts to take shape, new Austerity patient Lucille Bluth joins the production and is extra critical of DeBrie. Tobias encourages her until the night of Cinco de Cuatro, the night of the preview performance. At Cinco, Tobias sees children and, being a sex offender, must flee. He gives his Thing costume and role to Buster. DeBrie finds some of Dr. Norman's drugs in the harbor and takes them, passing out in a pile of debris. Lucille 2 sees this and threatens to send Tobias back to prison. Tobias props up DeBrie and tries to find a replacement but ends up covering himself in blue makeup and accidentally gets on Marky Bark's boat. The Fantastic 4: An Action Musical show is put on, and is as expected — horrible.

In the chronological re-cut of season 4, footage from Smashed is used in 7 different episodes. The original cut of Season 4 is slightly longer than the re-cut version. Because of this, various lines of dialogue and sometimes even scenes are cut. These changes, as well as which scenes appear in which remixed episode, are listed below:

Tobias: I'm also an analyst and a therapist, which makes me...

Narrator: Prison had taught Tobias at least one thing.

Narrator: And she never even saw the license plate.

Tobias: Oh, pardon the mess. I just blue myself for the first time in five years!

→ See more quotes from "Smashed" at Transcript of Smashed.