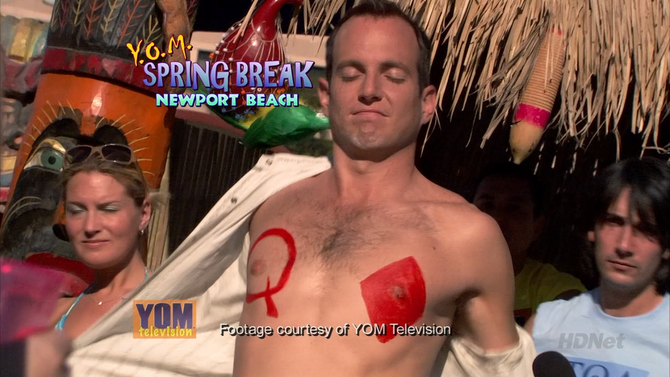 Spring Break is a favorite "holiday" of certain members of the Bluth family and employees of the Bluth Company. Some people (especially G.O.B. and Kitty) believe they deserve two-weeks of paid vacation.

While performing and flubbing the shirt-off-my-back illusion for Y.O.M. Spring Break: Newport Beach, G.O.B. vows that the following year he will pull off an astounding act: making his family's yacht the Lucille disappear.

That same year, Kitty failed to get the attention of the crew filming Girls with Low Self-Esteem which was, ironically, a blow to her self-esteem. ("Missing Kitty")

G.O.B., with the help George Michael, attempts to perfect the shirt-off-my-back illusion. But his real goal of the year is to redeem himself for the Y.O.M. audience and make the yacht disappear. After eventually getting Michael's permission, G.O.B. successfully performs his Disappearing yacht illusion. He later reveals he sank the yacht to make it disappear.

Meanwhile, Kitty Sanchez, freshly home from receiving breast implants, takes her holiday leave from the Bluth Company to party on the beach and have margaritas made in her mouth at Señor Tadpole's. She and Michael argue about her employment and behavior and she decides to get revenge on the Bluth family by stealing evidence off their yacht. She survives the detonation, clinging to the evidence. ("Missing Kitty")

Kitty yet again strikes her revenge against the Bluth family by kidnapping George from the attic and holding him hostage in a hotel room so he can impregnate her. Lucille checks out of rehabs and challenges Kitty to a drinking contest to distract her while G.O.B. and Michael rescue George. Lindsay and Tobias attempt to film their own pornographic series Men with Low Self-Esteem to show Phillip Litt, the producer of Girls with Low Self-Esteem the error of his chauvinistic ways. Instead, the event reveals that Litt and Tobias are both Never Nudes. ("Spring Breakout")