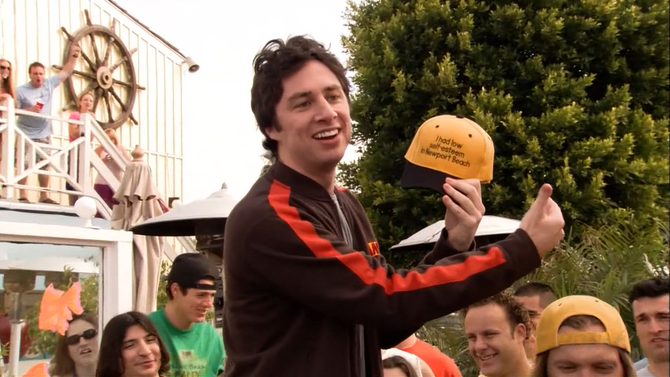 G.O.B. confronts the editor of the videos that showcased his magic mistakes; Michael tricks Lucille in to rehab, and then attempts to get her out after George Sr. is kidnapped.

The company has a meeting with Cal Cullen, who comments that the Bluths "did not come off well on last night's Scandalmakers." (Clips from Scandalmakers are then shown, including Tobias, as George Sr., giving away his hiding place.) Michael says that they are "scandal-free," at which point Lucille walks in drunk, having taken Buster's pain medication for a hangover, misreading an alcohol warning as an alcohol suggestion. Cullen refuses to do business with the Bluths, saying that he "couldn't afford to end up on Scandalmakers." Lucille passes out in her chair, and Michael ends the meeting.

Michael suggests to Lindsay that they hold an intervention for Lucille, but Lindsay resists, flashing back to another intervention the previous year. The family had gotten drunk themselves out of fear, and by the time Lucille had arrived, they were too intoxicated to be effective, and it had turned into a party. G.O.B. appears and suggests rehab instead. Michael asks where he was in the meeting, but he replies that he was off for spring break, even though his reputation has been ruined by "that jerk Phillip Litt" filming his seven flubs in a magic act. Tobias appears and complains about being panned for his performance as George Sr. Maeby is ordered to find out how teenagers actually talk and then revise the dialogue in The Young Man and the Beach.

Knowing that Lucille won't go to rehab willingly, Michael offers her a trip to Cal Cullen's spa. She cannot take Oscar, because his last pair of pants has fallen apart, so Michael decides to go with her instead. Upon arriving, Lucille realizes where she is and tries to flee, only to be subdued by the guards.

Kitty Sanchez finds George Sr. in the attic, clued in by Tobias's line in Scandalmakers ("perhaps an attic shall I seek.") Angry about being abandoned in Mexico, she kidnaps him, blackmailing him with a "cooler of evidence." Meanwhile, to get ideas for better dialogue, Maeby joins George Michael at the Banana Stand. A Freudian slip by George Michael reveals his persistent feelings for her. Phillip Litt is using the same lot to film his video, Girls With Low Self-Esteem, despite an ineffectual protest led by Lindsay.

Kitty takes George Sr. to a motel and screams that he owes her a child. George yearns for Lucille, as does Buster. Buster, unable to sleep, begins to drink from a large box of wine, mistaking it for a juicebox.

Michael meets with Cal Cullen again, and wins him over by pretending to have fond memories of Sugarfoot, despite the fact that it was off the air before he was born. However, Kitty interrupts, flashes her breasts, and threatens to "bring this corrupt company down" unless Lucille meets her in a certain bar.

While the family wonders how to get Lucille out of rehab, Lindsay complains that her brothers objectify women. She comes up with the idea for a competing video, Men With Low Self-Esteem. G.O.B. uses Oscar to distract the guards so that they can abduct Lucille, pretending that they're going for new pants. Kitty offers to trade her evidence for a sperm sample from George Sr., and Lucille puts it up to a drinking contest.

G.O.B. finds a cooler in the freezer that looks exactly like the evidence, and he and Michael plan to switch it with the evidence, despite knowing this to be ineffective. Maeby is frustrated by the immaturity of the teenagers at the Banana Stand. Nearby, her parents' film Men With Low Self-Esteem, bringing them into competition with Phillip Litt. When Litt accuses Lindsay of being ashamed of her body, Tobias pulls down Litt's pants, exposing him as a never nude. Seeing this, Tobias takes off his own pants, revealing that he's "back in the cutoffs".

G.O.B., excited at the thought of spring break, performs a wolf call in the hotel hallway. This inadvertently sets off a response by George Sr., allowing them to find his room. G.O.B. tries to vomit up the handcuff key, while Michael forges the signature of Saddam Hussein on the cooler, promising to turn it in to the police. George Sr. tells Michael to turn it in, saying that the evidence exonerates him.

George Michael finds Maeby talking to a vapid boy. He says that she is like a "delicate flower" and that he doesn't "want her to be plucked by someone who doesn't even care that [she is] blossoming." Maeby says that this is just what she wanted to hear, and kisses George Michael on the cheek. George Michael takes this the wrong way, and calls up Ann, saying that they need to talk.

Lucille wins the drinking contest, despite drinking extra between rounds. She declines to have more, opting to go back to rehab instead. G.O.B. regains his self-confidence, but then falls into the pool, destroying the exonerating evidence. When Michael gets home, he finds out that the decoy cooler contained a sperm sample from George Sr.

Add a photo to this gallery
Retrieved from "https://arresteddevelopment.fandom.com/wiki/Spring_Breakout?oldid=55251"
Community content is available under CC-BY-SA unless otherwise noted.