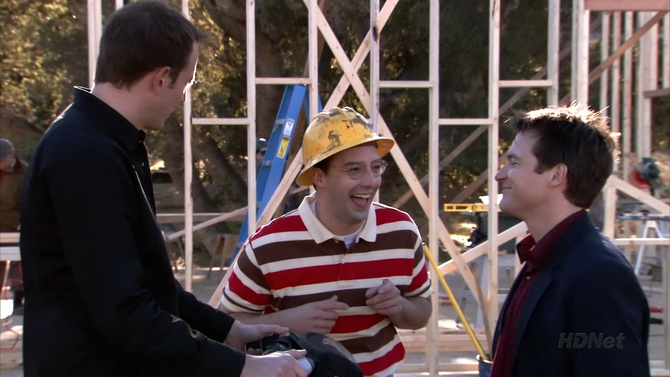 When Michael discovers his family has been receiving paychecks without working, he forces them all to get jobs within the company. Lindsay questions his management skills, and Tobias checks himself in at George Sr.'s prison to research a film role.

The Bluth company is in financial strain due to a new subdevelopment taking longer than expected. No employees, including the non-working Bluth family members, have recevied paychecks but Michael tries to inspire everyone to power through for the short-term. Lindsay joins a staff meeting in order to claim her paycheck. She treats the employees to non-florescent lighting and tells them she is taking them to lunch, but they accidentally board Lupe's family reunion bus and get stranded on Catalina Island.

Michael goes for a bike ride to clear his head and stops by the banana stand to spend time with George Michael. George Michael, meanwhile has been teased by Annyong and Maeby that Michael is too busy for him so he heads back to the Bluth Company offices where he finds a distraught Lindsay worrying about the missing employees. She leaves and SEC agents rush the office, unaware of George Michael's presence. They only steal a folder of his childhood artwork, proving to George Michael that his father does love him.

At the beach, Michael enlists the help of some children to model out the subdivision. The tide ruins the houses and teaches him he needs to opt for a communal pool rather than individual pools. He bikes to the construction site to halt construction. Lindsay arrives with Lupe's family as scabs but Michael smooths the whole thing over with everyone by treating everyone to Lucille's Quantity Plus groceries, which is entirely alcohol.

After working a brief stint in the copy room at the Bluth Company offices, Buster is set up with a job at a construction site. G.O.B. stops by to acquire his paycheck but Michael puts him to work as well. Buster is content to work without pay but G.O.B. is too proud to do so. G.O.B. and Buster then face off in a game of chicken, driving two bulldozers toward each other. Neither of them flinch and they collide at a sluggish speed. Buster finally wins G.O.B.'s respect and he calls for everyone to get back to work.

Back at the Bluth offices, Lindsay has heard that work has stopped so she rounded up Lupe's waiting family on the stair car and drove them to the construction site.

Tobias checks into Orange County Prison by promising to give Carl Weathers a script of New Warden by Warden Stefan Gentles. He greets George Bluth in the prison yard at an inopportune time: White Power Bill has just knocked out Little Justice for converting to Judiasm. Tobias asks to be taught, but George promises White Power Bill "no teaching."

Add a photo to this gallery
Retrieved from "https://arresteddevelopment.fandom.com/wiki/Staff_Infection?oldid=54808"
Community content is available under CC-BY-SA unless otherwise noted.