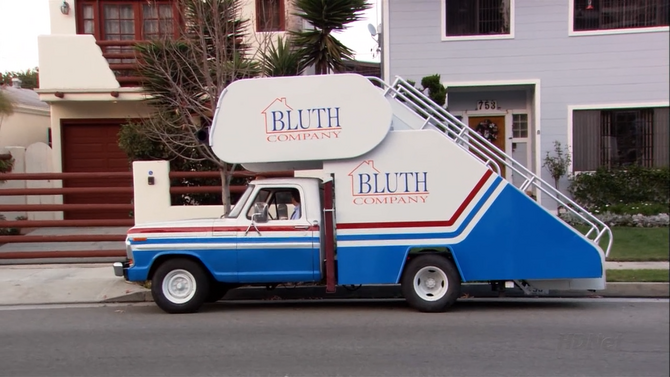 The stair car was one of the few remaining modes of transport available to the Bluth family, and was frequently driven by Michael Bluth. It was originally paired with the company jet, which was sold off to help deal with the company's financial woes. It had a large Bluth Company logo on the side.

It has led a notorious existence, knocking down banners, ("Queen for a Day") helping inmates attempt to escape prison, ("Visiting Ours") ("Prison Break-In") and letting people sneak to upstairs windows. ("Shock and Aww") A constant problem while driving it is avoiding hop-ons. ("Sword of Destiny")

Michael Bluth: Watch out for bridges and hop-ons; you're gonna get some hop-ons.
From "Key Decisions"

Michael: Stair car basics: In order to get this thing up to a minimum speed, you’ve got to jam on the gas pedal for about a minute, okay? But in order to slow this thing down, you’ve got to get almost immediately back on the brake pedal, ’cause you’ve got about two tons of stairs behind you.

Michael: We’re gonna cover the hydraulic flaps and the riser system after I tell you the basics about how to avoid a hop-on. But the first thing we’re going to go over... Ow...