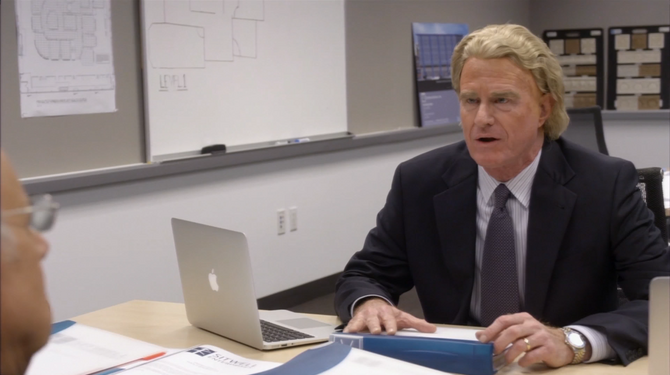 Stan Sitwell is a real estate tycoon who runs the company Sitwell Enterprises, which competes with the Bluth Company. He is also the biological father of Sally Sitwell.

He is portrayed by Ed Begley, Jr. and appears in fifteen episodes over Seasons Two through Five .

Stan is the founder and president of Sitwell Enterprises. He runs his company with professionalism and encourages his employees. He is also a generous philanthropist and contributes to numerous charities. ("Switch Hitter")

Stan Sitwell and George Bluth are longtime business rivals, with Stan often taking the high road and George always taking the low. George and Lucille adopt Lindsay before he has a chance to, just to stick it to Sitwell. ("Development Arrested") George also intimidates Stan by telling him Michael is going to "stick" it to Sitwell's daughter Sally, but the attention caused Michael to freeze despite Sally's interest. ("Burning Love")

Stan buys a controlling interest of the Bluth Company from Lucille ("Development Arrested") but when she is arrested he immediately sells them at a loss to Lucille Austero. ("Flight of the Phoenix") He then plans to recoup his money by building a wall between the US and Mexico for the US government. ("Borderline Personalities")

Stan Sitwell has a medical condition that prevents him from growing hair on his body, alopecia universalis. Lucille incorrectly refers to him as an alpaca. Due to his condition, he wears wigs and fake eyebrows which often fall off into candy beans or become misaligned. He also can't drive convertibles without losing his eyebrows. ("Switch Hitter") He tries on a long blond wig, but ends up looking like Edgar Winter. ("Ready, Aim, Marry Me")

Stan Sitwell meets with Michael and G.O.B. at the model home to discuss a possible cooperate business venture. Michael runs the idea past George who is hiding in the attic. In the meantime, G.O.B., acting president of the Bluth Company, tells Sitwell to screw off and Sitwell, impressed that G.O.B. smelled the rotten deal (although G.O.B. was just disgusted at Sitwell's eyebrows falling into a bowl of candy beans) offers G.O.B. a job at Sitwell Enterprises. George tells Michael that this is just for G.O.B.'s abilities during the company's upcoming softball game. Michael tells this to G.O.B. who is internally torn for his loyalty to the Bluth family and to the support and fatherly encouragement he's received from Stan Sitwell. At the softball game, G.O.B. hears from Sitwell that he doesn't care about the softball game and that he just wants G.O.B. to be happy, so G.O.B. wins the game for Sitwell Enterprises. ("Switch Hitter")

G.O.B. continues to work for Sitwell Enterprises, but can't get past one good idea: a neighborhood for single adults. G.O.B. evolves the idea from "Swing City" to "[Bleep] City" and is fired by Sitwell. ("Queen for a Day")

Sally Sitwell runs into Michael and their mutual attraction is rekindled. Michael runs into her and her father, Stan, at the country club and although he wants to flirt with Sally, he doesn't want to be disrespectful in front of Stan. The trio see G.O.B. and Lucille Austero, who have recently become a secret item. G.O.B. refuses to read the menu to her so Stan sensually reads the desert menu to her. The next night at the bachelorette auction Stan bids on Lucille Austero but loses to G.O.B.. He also trades Michael $15,000 for his new Corvette so Michael can bid on Sally. ("Burning Love")

Stan Sitwell begins seeing Lucille 2 socially. This makes G.O.B. and Michael believe she is planning on selling her majority stake in the Bluth Company to Stan, so G.O.B. and Buster stalk her at the Four Seas resort. She grows upset and decides to actually sell her shares, and Stan chases her, hoping to low-ball her. ("Ready, Aim, Marry Me")

When the Bluth children get more Bluth Company stocks, they consider selling them to Stan Sitwell. Lindsay visits his office where she discovers that she was adopted and that she is three years older than she previously thought. Lindsay attacks him and grabs his wig off his head. Days later, Stan attends George's exoneration part aboard the RMS Queen Mary. When Michael cries during his speech and decides to abandon the party to find George Michael, Lucille bartered to sell the Bluth Company to Stan for 12% above market value. ("Development Arrested")

While still aboard the Queen Mary, Stan immediately sells his shares to Lucille Austero. ("Flight of the Phoenix") He fallsoverboard with the rest of the guests and loses his wig and nipple tufts. George visits his office and tries to sell him his shares, but Sitwell refuses. He brags that he's found a contract with the government and George takes a photo of the plans to build a wall between the US and Mexico. ("Borderline Personalities")

Lucille: That hairless freak is coming here? None of his hair is real, you know.

G.O.B.: You mean the guy we’re meeting with can’t even grow his own hair? Come on!

Michael: It’s called alopecia, and I’d appreciate it if we could all be sensitive to it, okay? He happens to be a very modest and generous man.

Lucille: Modest and generous? Then why is he always waving giant $10 million checks over his head every time some...?

Michael: What are you talking about?

G.O.B.: He’s hairless, Michael. It’s a condition. And I hate the guy, but at least he’s got [bleep]. Satiny and smooth, probably.

Michael: Well, yeah, but Stan Sitwell’s always had a wild hair to buy this business.

Lucille: It’s the only hair he’s got. What? He’s an alpaca.

Michael: He has alopecia.