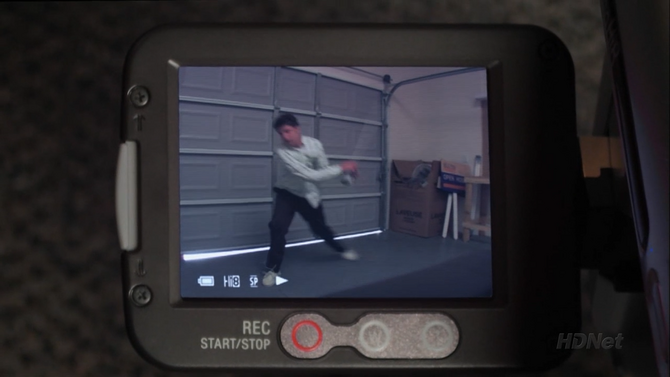 Star Wars Kid is a viral video featuring a teenager using a stick as a lightsaber in his basement. The video was recorded in private but spread through the world on YouTube, to the embarrassment of the kid.

Likewise, in Arrested Development, George Michael recorded himself lightsaber fighting in the model home's garage and he was embarrassed many times by it.

George Michael taped over a home video of an anniversary party thrown by Saddam Hussein for George Bluth. The family watched the video as a whole and G.O.B. called it "the lamest thing ever put on tape." No one had seen Buster's version, set in Balboa Towers, which combined the musical Chicago and Star Wars. G.O.B. uses the tape to make George Michael's student council campaign video, and George Michael's fight is accidentally shown to the entire high school. He is then called "Star Dork" but regains the attention of Ann Veal, another "star dork". ("The Immaculate Election")

The FBI obtains a video of George Bluth giving advice to Bluth Company employees. Also on the tape they find the clip of George Michael's lightsaber fight. ("Sword of Destiny")

George Michael records Rita eating plastic fruit on the family camcorder, and must fast forward through his lightsaber fight. He admits the family should just buy a new tape, since they're not that expensive. ("The Ocean Walker")

While fundraising the fake TBA disease, G.O.B. uses a clip of George Michael's lightsaber fight as evidence for the fake disease. ("Sword of Destiny")