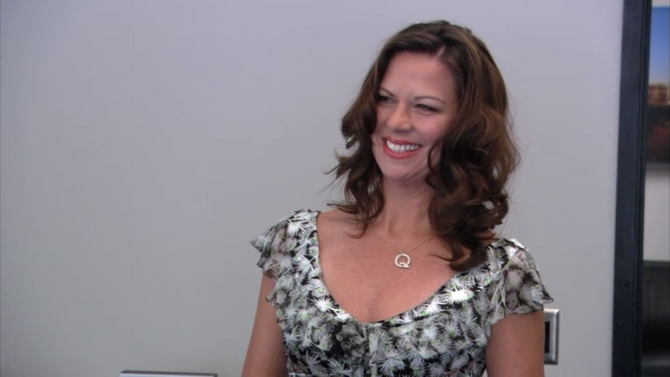 Starla is a model, business model, and secretary for the Bluth Company
Actor: Mo Collins — First Appearance: "The One Where They Build a House" — Last Appearance: "Sword of Destiny"

Starla is a "business model" hired by G.O.B. to represent the Bluth Company. She later turns into a personal assistant of sorts for G.O.B. and a romantic interest for Buster.

Starla is initially hired by G.O.B. to be a "business model" for the Bluth Company, a job which consists of wearing a costume and holding a "Solid as a rock" sign at board meetings and press events. She later works as an assistant to G.O.B. and Michael.

Starla often proves to be quite incompetent as a secretary, thinking "photo copies" means 4x6 size prints. She claims that she had an affair with producer Quincy Jones, a claim backed up with the display of several of his gold records along the walls of Starla's house but disputed by spokespersons for Mr. Jones.

Starla is first introduced at a boat show that G.O.B. is attending, showing off The Seaward. She is later hired by G.O.B. to work for the Bluth Company as a their "business model". She keep the same "Solid as a rock" tagline, which Michael believes is off-putting since the Bluth Company is suspected of building house in Iraq. ("The One Where They Build a House")

Starla begins working around the Bluth Company offices as a secretary and can't figure out how to make standard copies. She draws a comparison between Michael and Quincy Jones as being perfectionists. ("¡Amigos!") She plays for the Bluth Company in their annual softball game against Sitwell Enterprises. ("Switch Hitter")

Michael sets Starla and Buster up on a date when he finds out that Starla loves her mother as much as Buster loves his. As a result of Starla's new found happiness, she attempt to break-up with Quincy (if she can get past his security system). However, Michael asked Buster to leave Starla and keep Lucille Austero happy, which broke Starla's heart. ("Queen for a Day")

Starla gets rabies after being bitten by Quincy Jones' guard dog and gets antsy when Tobias applies to be Michael's assistant. She turns in a tape of George in the attic to the FBI. ("Sword of Destiny")

Retrieved from "https://arresteddevelopment.fandom.com/wiki/Starla?oldid=41863"
Community content is available under CC-BY-SA unless otherwise noted.