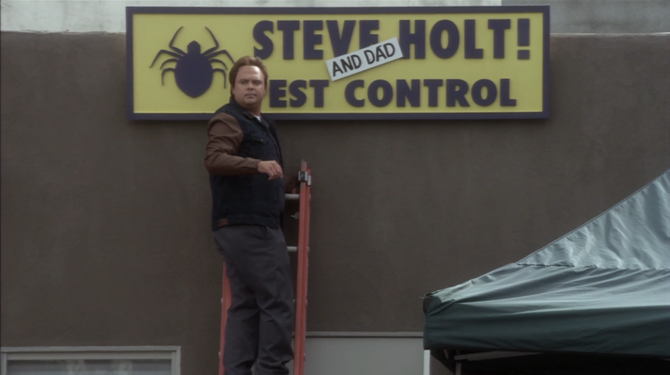 Steve Holt! Pest Control is the pest control company owned and operated by Steve Holt, from 2007 to 2012.

In 2007 after being dumped by Ann after his failed Amazing Jesus illusion, G.O.B. went to the club and Jeremy Piven to reunite with his son Steve and spent an hour speaking to a bald man. The man turned out to be Steve Holt and G.O.B., attempting to save face, accepted a job with him at his pest control company. To celebrate, G.O.B. stayed at the club and made friends with Marc Cherry. G.O.B. spent the whole night partying so he missed his first day at work at the newly christened "Steve Holt! and Dad Pest Control". ("Colony Collapse")

In 2012 Steve sprayed the model home and wasn't recognized by Maeby. ("A New Attitude") ("Señoritis")

Add a photo to this gallery
Retrieved from "https://arresteddevelopment.fandom.com/wiki/Steve_Holt!_Pest_Control?oldid=53364"
Community content is available under CC-BY-SA unless otherwise noted.