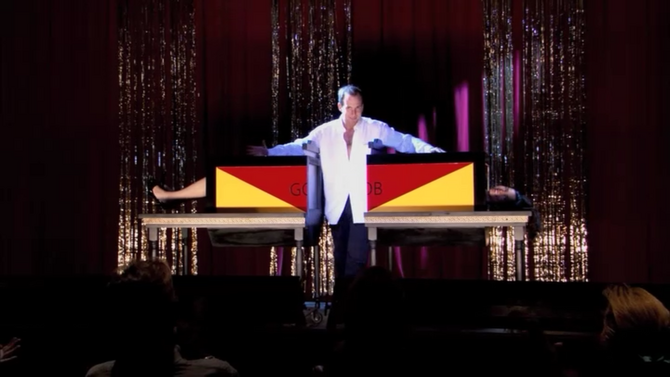 "Storming the Castle" is the ninth episode of Arrested Development's first season.

Michael cannot go through with his plan to break up G.O.B. and Marta. A thug magician wants to take G.O.B.'s "legs". Maeby wears all leather to get back at her mother, and Lucille decides to confront Buster's relationship with Lucille 2.

Michael performs a cost-projection analysis for a shopping center when he decides he wants to take a nice leather chair from the office for the model home. While riding his bike to work a man named Rollo threatens G.O.B.'s legs. Michael finds his brother at the Playtime Pizza Theater and finds out the legs are just his assistant for the saw the lady in half illusion, with whom G.O.B. is sleeping.

Michael, jealous of G.O.B.'s girlfriend Marta, stages a ploy to break them up after G.O.B. steals his watch. He convinces Rollo to let G.O.B. perform at the Gothic Castle where the legs and Marta would discover they are both being cheated on by G.O.B.. Pleased with his plan, Michael treats himself by taking a leather chair from the office. At the show the legs do not show and George Michael stands in with his feminine legs. The act is a success, and G.O.B. reunites with Marta afterwards. However, the Alliance of Magicians refuses to re-admit G.O.B. after discovering the identities of his two assistants.

Lucille is getting upset at Buster's arrogance about his relationship with Lucille Austero. She takes Buster to visit George at prison to straighten him out but after his recent conversion to Judaism George is only supportive of Buster. At G.O.B.'s magic show, Lucille's anger only draws Buster and Lucille 2 closer together. When Lucille Bluth sees how happy Marta makes G.O.B. she decides to give her youngest son her blessing. She befriends Lucille 2 again and Buster has a panic attack.

When Lindsay tells Michael she is anti-leather Maeby decides to be pro-leather to spite her. George Michael joins in and they both get leather outfits. Tobias, trying to bond with his daughter, buys a "Leather Daddy" outfit. Lindsay doesn't notice the leather to Maeby's chagrin. Tobias wears the outfit to the magic show and accidentally ends up at the Gothic Asshole where he joins the Whips-and-Snaps Barbershop Quartet.