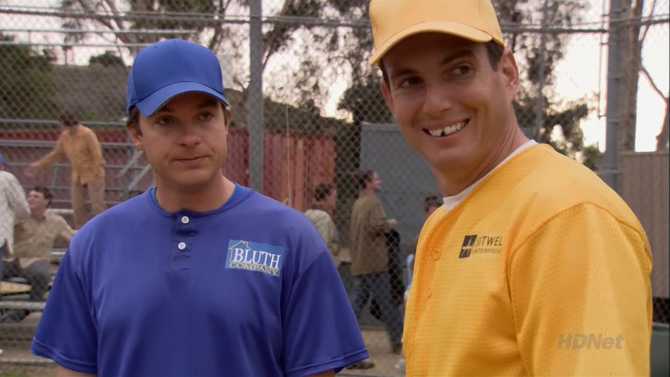 Michael schedules a meeting with Stan Sitwell, President of rival company Sitwell Housing Inc., at the house. Michael thinks that Sitwell sees that the company is in trouble and sees an opportunity whereas G.O.B. thinks the timing is suspicious because the Bluth Company and Sitwell Housing are about to play softball against each other. Maeby has a homework assignment on The Old Man and the Sea. She tries to get Michael to do it for her, but isn't able to get him to do it on time. So, to buy time, Maeby decides to skip school and go along with Tobias as he auditions for the role of "Confidence Man #2". She joins him to help him plot his route to the studio and tells him it's "Help your dad follow his dreams day" at school. We find out that Lindsay has been taking Teamocil, mainly for the side-effect of a decreased sex-drive. When Stan Sitwell comes over, he and Michael discuss a joint venture to build 450 homes, Sitwell agrees on the condition that one of the homes is given to a disadvantaged family. G.O.B. objects to the deal saying, "That's great. So the other 449 families live in fear? Is that what we're saying? I mean, come on!" When Michael goes upstairs to run the deal through his father, George Sr. shoots him down saying that G.O.B. was the only one making sense and that Sitwell was just trying to figure out the batting order for the softball game. While Michael is upstairs, G.O.B. refuses Sitwell's offer. Sitwell says he was smart to do so and offers him a job, which G.O.B. accepts.

Michael regains the title of President at the Bluth Company. George Michael visits him suggesting that they use Ann in this year's roster since it's a league requirement to have women on the team (something that was difficult to meet given G.O.B.'s behaviour in the game the previous year). Michael says that Lindsay is already on the team and that they should keep Ann as a backup (a good way to think of her, according to Michael). G.O.B. comes into Michael's office looking for his old job back since Sitwell started to ask him for work ideas. Michael offers to help G.O.B. and gives him a list of ideas he'd been working on. Meanwhile, Tobias and Maeby are at the studio. Tobias is talking up the Fünke name around the water coolers while Maeby calls George Michael from a studio exec's office. While in the office, she's mistaken for a studio exec and passes off her homework to a studio reader. After burning through all of Michael's ideas in a single meeting, G.O.B. is in his office when Sitwell comes and comments that G.O.B. "blew them away" at the meeting. Sitwell gives him a baseball glove and asks him to play on Saturday.

When Michael talks to George Sr. about his ideas not being so stupid, we learn that G.O.B. is the best softball player in the league and is known for sacrificing his body for the play. When Michael assures his father that they will still win the game George Sr. exclaims "Now that's what I want to hear!" and punches a rafter on the ceiling causing an oven vent to fall on Lindsay's foot, something she doesn't feel since Teamocil causes numbness of the extremities. Michael is forced to put Ann on the team. George Michael says this will be good, because she has a low center of gravity and is called "The Wall" because you can't knock her over. Earlier we learned that Lucille had been a U.S.O. girl during the Vietnam War and that she had met a General there. She is forced to go back to him and ask him to have Buster withdrawn from the army. He says he might be able to do something if Lucille "go[es] downtown" (singing the "Downtown" song). Buster is taken out of the army and put in the U.S.O. Michael meets G.O.B. at his office and asks him to throw the game explaining that Sitwell only hired G.O.B. to win the game and make the Bluths look foolish. Back at the studio Tobias loses his audition. Maeby is mistaken for a studio exec again, and gets her The Old Man and the Sea script looked at. She also gets Tobias a job at the studio as a security guard.

Later at the softball game, G.O.B. is throwing the game until Sitwell gives him a heart to heart talk and he decides to start playing better. G.O.B. hits the ball hard and on his run to the home plate he runs right into "The Wall" causing him to lose his tooth and start whistling when he talks. The umpire declares him out and there's a scuffle at the plate. G.O.B and Michael see that George Sr. is disguised as the umpire and he's trying to fix the game. Michael corrects his father and says that G.O.B. was safe, which causes the Bluth Company to lose the game. Michael tells his father that he's President whether George Sr. likes it or not. George Sr. says he's proud of Michael and then runs away from the field.