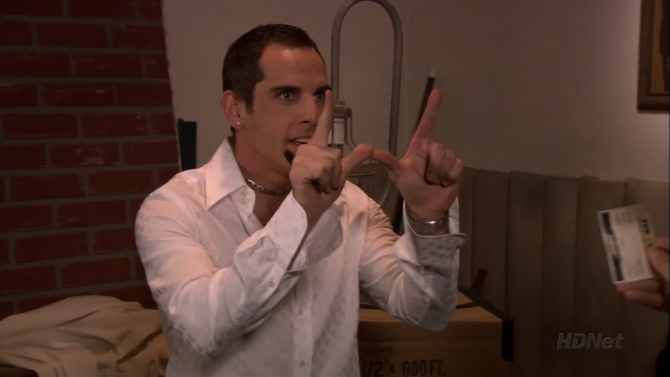 "Sword of Destiny" is the fifteenth episode of Arrested Development's second season.

G.O.B. and Buster team up for some magic illusions with the help of Buster's fake hand, but when Tony Wonder, a rival magician, starts to mentor them, somebody gets the finger. Meanwhile, Michael is forced to delegate some work when he's hospitalized and Lindsay teaches George Michael how to drive using the staircar.

Michael Bluth is stunned to discover that a contract his company was counting on is being cut back, and is on the phone trying to persuade the client to honor the original order when Lindsay marches in. She hangs up on the client and demands that Michael hire Tobias as his assistant so that Lindsay could get a break from Mrs. Featherbottom, Tobias’s singing British housekeeper alter ego. When Tobias shows up, Michael’s current assistant Starla feels threatened, and spreads the news of the order cut-back throughout the office as retaliation.

Tobias takes the opportunity to step into his "ass-masking therapist pantsuit" and opines that Michael has a problem with relinquishing control, and as a result is going to make himself sick. As if to support Tobias's hypothesis, Michael doubles over in agony clutching his side. Lindsay recommends Michael try out an herbal store called Ancient Chinese Secret. At that very moment, G.O.B. is at Ancient Chinese Secret buying a tea to prevent premature ejaculation ("Tea for dong!") when he notices a sword on display. The proprietor describes it as the Sword of Destiny, an ancient weapon cursed with a turbulent history. G.O.B. buys the sword to use in his magic act, ignoring the Chinese man’s warning.

G.O.B. catches up with Michael wearing his new sword strapped to his belt, and almost immediately cuts himself. To get around the ban placed on him by the Magician’s Alliance, G.O.B. wants Michael to register at the Gothic Castle as a magician, and G.O.B will masquerade as his "lowly assistant." Michael claims he's too busy teaching his son how to drive, which involves George Michael observing his father as he drives and gives pointers.

Before taking his son out for their drive, Michael stops by the attic, where George Sr. is making a videotape with a towel wrapped around his head like a turban. George Sr. tells Michael he made the videotape after hearing about the reduced order, to reassure the employees that a real authority figure is still in charge. "My presence needs to be reinstated," George Sr. says, as we flashback to his failed attempt to plant Tobias inside the Bluth Company as a mole.

Michael, preparing George-Michael to watch him drive, once again feels pain in his side and finally decides to take his first sick day. At the hospital, Dr. Stein - the "best doctor in the county" - explains that he's going to have to remove Michael's appendix. When Lucille and Tobias claim they will be able to cover for Michael at the company, and Lindsay volunteers to teach George-Michael how to drive, Michael is not reassured. He also seems uneasy with Dr. Stein's plan to slow his heart, but says "He's the authority here, we need to respect him the same way the employees of the Bluth Company respect me."

Meanwhile, G.O.B. is trying to recruit Buster to play the part of a magician so that G.O.B. could perform as his assistant at the Gothic Castle. His plan is for Buster to ram the Sword of Destiny through G.O.B.’s belly, a feat of magic on a level with Tony Wonder, and guaranteed to get him reinstated back into the Magician's Alliance.

The next morning, both Tobias and Lindsay are violating Michael's orders: Tobias, heading a meeting at Bluth Co., shows the "inspirational" videotape George Sr. had made in the attic, while Lindsay puts George Michael behind the wheel of the stair car. Meanwhile, at the Gothic Castle, G.O.B. and Buster - outfitted with a mechanical Halloween hand - run into Tony Wonder, who does several flamboyant magic tricks before wishing them good luck on stage. However, the Sword of Destiny illusion goes wrong when G.O.B., brandishing the sword dramatically, accidentally slices off Buster’s fake hand. The hand, being a Halloween toy, wriggles around on the stage until G.O.B. jams it back on Buster’s stump. The impressed audience thinks this is the trick. Backstage, Tony Wonder compliments Buster on his convincing illusion and asks him and G.O.B. to perform on his next DVD.

Michael awakes from his appendectomy to learn that Lindsay had already taught George-Michael to drive. The bad news continues when Dr. Stein tells Michael that, as it turned out, his appendix wasn’t actually inflamed - and that a bacterial infection from the operation had given him an abscess on his abdominal wall. Dr. Stein recommends to "go in there, Dr. Stein-style, and cut it out." Michael, still wanting to prove a point about respecting authority, agrees to this despite Lucille’s protests. His family leaves and Michael is dozing off when a newsbreak comes on: Starla had turned in the tape George Sr. had made to the FBI, which contained a shot of Michael walking through the background of the attic. They had matched the design of the attic to one of Saddam’s houses and assumed George and son were hiding out in Iraq.

Elsewhere, Buster and G.O.B. meet with Tony Wonder about the act they're doing for his DVD. When Tony Wonder tells Buster he doesn't need his assistant, G.O.B. angrily jumps up, rips off his mask, and proclaims that 'he' is the real magician and that the real Sword of Destiny trick hadn’t even been performed yet. Intrigued at the secret identity angle, Tony agrees to let them both perform at the show.

Michael awakes from his second surgery to hear "whoopsie" - Dr. Stein thinks he might have left his snippers inside Michael's body. Despite this bad news, after learning that Tobias had been handling things with the business, Michael pulls himself out of bed and rushes to the office, only to find "his worst fears had come true": the entire floor had been emptied. Michael is beating himself up over taking a sick day when the elevator opens on the next floor down, where the Bluth Company is setting up their new headquarters. An employee named Ted explains to Michael that they had leased out the expensive top floor to another company and were moving in one floor below, a move that would save the company enough money to stay afloat despite the order cutback. The employees were jubilant. Incidentally, Ted had proposed this exact strategy earlier, only to be rejected by Michael.

Back at the Gothic Castle, Buster and G.O.B. are again onstage. G.O.B. whispers to Buster to swap out the real sword for the fake one, then announces to the crowd that he is the real magician and Buster is only his assistant. Unfortunately, Buster hands G.O.B. the real sword, blade first, and slices off G.O.B.’s fingers. The audience (and Tony Wonder) think this is the trick and are very impressed.

And Michael comes to a decision. He is going to relinquish some control and - for starters - let George Michael drive home. But because George Michael had learned to drive on the stair car, which requires the driver to stomp the gas pedal to go anywhere, when he got behind the wheel of the family Mercedes-Benz he guns it and hits his father, breaking Michael’s leg.

Add a photo to this gallery
Retrieved from "https://arresteddevelopment.fandom.com/wiki/Sword_of_Destiny?oldid=55206"
Community content is available under CC-BY-SA unless otherwise noted.