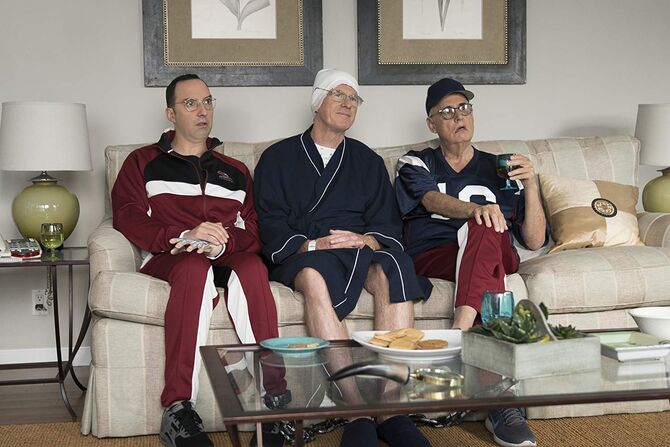 Buster, Oscar, and Stan Sitwell arrive at the Spotted Palm retirement community, while a neighbor ignores Stan's plea to call the police. In another part of the community, George Michael visits Maeby to thank her for filling Fakeblock with fake employees for Rebel's recent visit to the office. He thinks that she fired the real employees months ago. However, she explains that she told Joan in HR to fire everyone at Fakeblock and then she fired Joan, who apparently didn't fire anyone else. Speaking as Annette, she also talks about killing off Maeby so she can live in the Spotted Palm forever. Meanwhile, George Michael worries that he'll be so deep in debt he'll have to live in his old bedroom.

Later at the model home, Michael finds his son in his old bedroom, having a minor regression. Michael tells him about a "Gated Community" file in the Bluth Company computers. He is trying to print it out on the 3D dental printer and asks his son to help him with the error messages. George Michael confesses to his dad about Fakeblock being in debt, so Michael offers to move them to the third floor where the Bluth Company used to be, before moving up to the fourth floor.

Up in the attic, Tobias argues with Murphybrown and Debrie about not having enough food. Tobias decides to get them a new place to live at the Bluth Company.

Maeby, as Annette, returns to her condo while Buster, Oscar, and Stan are there. Buster recognizes Maeby at the door and asks "Why'd he call you Annette?" Panicking, she hits Stan on the head, then Buster and Oscar escape. Going to the beach, Buster and Oscar rent a Zorb ball before deciding to get a tandem bike instead.

Soon George Michael shows Maeby the offices on the third floor, and she tries to convince him to let Rebel buy Fakeblock. She also talks about Annette as another person and wonders how to make Stan go away without hitting him on the head again. George Michael is hoping to sell Fakeblock to someone else, but first he needs a new clueless president that won't ask questions about the software. Just then Gob comes downstairs to check his email, and he tells them he's looking for a new job since he quit the Bluth Company. He mentions that he also let Tobias and his family move into the office kitchen.

Maeby and George Michael decide to hire Gob to be the president of Fakeblock. He evicts Tobias and family from the office kitchen. Not wanting to return to the attic, Debrie suggests they move to a nearby tent city. Then Tobias gives Gob an invitation from the Gay Mafia. Gob thinks this might be a message from Tony Wonder.

Michael and George Michael check the 3D printer and find a map of a border wall (but printed out as a row of teeth). They uncheck the "presume teeth" setting on the printer and print the "Gated Community" file again.

Meanwhile Gob goes to Quick Hard Cement to meet the Gay Mafia. Argyle Austero is threatening to tap dance on somebody's grave. Argyle tells Gob that they know he is really straight, that he only came out as gay for his parade trick. They also saw his TV announcement that he is going into Christian conversion therapy, and they are angry at him. Argyle wants Gob to go to the therapy but then announce that it didn't work. He says Gob has to stay gay for seven years, then they'll let him "age out." Argyle says this is more generous than what they did to Tony Wonder for pretending to be gay. Gob tries to tell Argyle that Buster probably didn't kill Lucille Austero. Argyle says he fought all the time with his sister, so he's not worried about her.

On the next AD, Tobias and family move into a Tent City store in a mall.

Retrieved from "https://arresteddevelopment.fandom.com/wiki/Taste_Makers?oldid=54719"
Community content is available under CC-BY-SA unless otherwise noted.