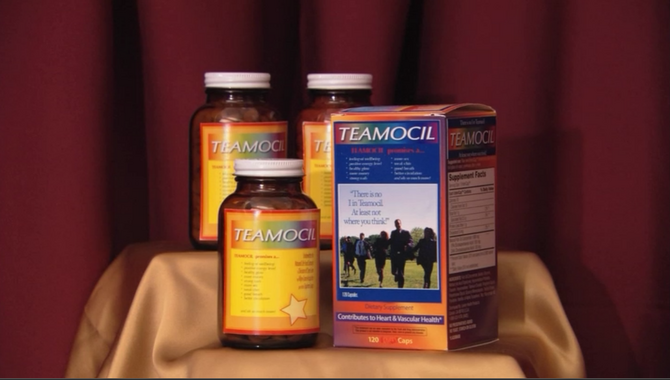 Teamocil is a psychiatric drug developed in the mid-1990s by the Natural Life Food Company.

The name "Teamocil" may be a play on words. It is a contraction of the Spanish words "te amo" and "cil," which translated to "I love you easily."

The drug was promoted by Tobias with his folk-band, Dr. Fünke's 100% Natural Good-Time Family Band Solution. However, it was discontinued after studies prove the feeling of wellness it gives the user in relationships is simply a precursor to total shutdown of the pituitary gland. The drug may also decrease your sex drive, cause numbness of the extremities and produce a feeling of camaraderie. ("Best Man for the Gob") Lindsay and G.O.B.'s wife both regularly took the drug. Lindsay took the drug after it was discontinued in order to get along in her relationship with Tobias. ("Switch Hitter")

There's no 'i' in Teamocil,
at least not where you think.
So together let us make a choice
and for once we'll be in sync.

Teamocil may decrease your sex drive.

From "At Long Last... Music and Songs from Arrested Development"
Retrieved from "https://arresteddevelopment.fandom.com/wiki/Teamocil?oldid=34825"
Community content is available under CC-BY-SA unless otherwise noted.