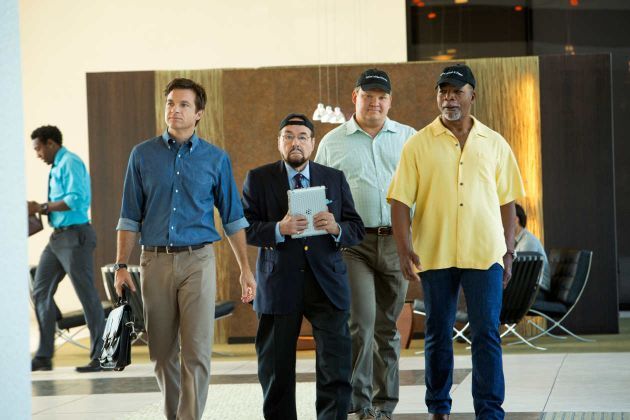 "The B. Team" is the fourth episode of Arrested Development's fourth season.

Michael is presented with a new business opportunity that could change his life. Unfortunately, he needs his family to sign off.

To cope with the failure of the Michael B. Company and his $700,000 debt to Lucille Austero, Michael got a job at Google driving a Google Maps StreetView car. During a drive he received a call from Barry informing him that Ron Howard wanted to meet with him. Michael drove up to Hollywood to meet at the offices of Imagine Entertainment when he bumped into Kitty, who was employed by Imagine and who had edged Maeby out of her movie producer career.

Ron had seen Michael's in flight magazine article and decided to make a film about the financial collapse and wanted it to revolve around Michael and feature the rocky Bluth father-son relationship. Ron tasked Michael with getting signatures from every member of his family. Upon being named a Producer, Michael ran into a beautiful red-headed actress on the street whom he though would be perfect Tracey Bluth. She slipped away without him learning her name but not before telling him about her bagpipe concert at the Ealing Club.

Michael tried to track down his father for his signature at Balboa Towers and thought he saw him with Lucille Austero on her balcony. In the hallway, upon asking for his signature and extremely hesitantly saying he'd make the character of George Bluth look nice, Michael was told a very firm "go to hell." Michael then met with Kitty in his new and very short office where she threatened to bury him if he made one misstep. He then met with Carl Weathers to see if he could get Carl's Bluth family rights from Scandalmakers but Carl never obtained the rights, thus causing another episode of Scandalmakers about him.

Taking a page from Carl's book, Michael met with Stefan Gentles to write the screenplay. Gentiles suggested Philip Seymour Hoffman for the role of George but instead Michael approached Andy Richter, who joined when Conan O'Brien insulted him. The four men tried to meet with Ron but were warned by Kitty that he doesn't like surprises. They were then stuck in the elevator between floors and were at foot level with Ron and Brian Grazer. Ron asked that Michael come back when he had all the signatures.

Michael was moved down to Orange County Imagine where his father stumbled into his office with Mexican porn. They caught up and Michael mentioned the cute redhead to him so he decided to sign his rights to the film. Outside the Ealing Club, Ron told Michael that he didn't care about George's rights, he needed George Michael's rights to make the father-son dynamic work. Michael was hesitant to invade his son's privacy again. To take his mind off it, he listened to the red-headed girl's concert and the two bonded over their children. They then had sex in a photo booth and Michael finally learned her name from her tattoo: Rebel, whom Michael believed was the mistress of Ron Howard (but was in reality his daughter.)

In the chronological re-cut of season 4, footage from The B. Team is used in 8 different episodes. The original cut of Season 4 is slightly longer than the re-cut version. Because of this, various lines of dialogue and sometimes even scenes are cut. These changes, as well as which scenes appear in which remixed episode, are listed below:

Ron Howard: I think it's a lot more fun to see her die.

Producer: Sorry, you're not charring my tree.

Warden Gentiles: It's a slideshow of my granddaughter's daughter's graduation from college... or was it high school?

→ See more quotes from "The B. Team" at Transcript of The B. Team.