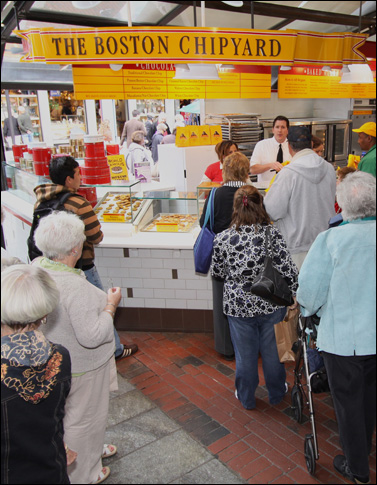 The Boston Chipyard is a cookie stand started by Arrested Development creator and showrunner Mitch Hurwitz that served as inspiration for the banana stand.

The stand was opened by Mitch and his older brother Michael in the summer of 1976. The business is still around today, operating in Boston.

In May 2013 Mitch Hurwitz had an interview with LA Magazine and he discussed the Chipyward and its origins.

When I was 12 and my brother was 15 we started our own business, the Chipyard. We were going to sell cookies off a cardboard table in our front yard, but my father put up the money for us to run a little stand on Balboa Boulevard. We had no idea what we were getting into. We sold about 20 cookies the first day, 30 cookies the next day and around mid-summer a guy from the LA Times came down. He asked to speak to the owners, and I said, "We are the owners." He did an article about us, and the next day we sold 6,000 cookies. It was going to be a lesson in how tough it is to earn a buck for the kids, but it turned into a valuable revenue stream.

It created so much discord in the family. There was a divorce scenario playing out; it was a loaded time. My father, who's a hilarious guy, coined the phrase "The family that works together hates each other." He said to me, "You ought to write a play about this." I was pretty sure I wanted to be a writer, and I told him, "No, dad. That's impossible. You can't write a play without conflict." I remember him screaming with laughter as he left the Chipyard. It was an insane period of time.

My brother and I ended up slaves to that place. The idea of wearing a silly little outfit and standing inside a very cramped space and having to work while all your friends are at the beach all summer, that inspired the frozen banana stand on the show. One guy actually threatened to firebomb [the Chipyard]. I remember my brother saying, "If you feel strongly, maybe you should explore that." Really. We wanted out. When I showed my brother, who's now a surgeon, a rough cut of the second episode of [Arrested Development] where George Michael burns down the banana stand, he said, "Oh, my god you burned down the Chipyard!" I was very excited about that. It was a great expiation for both of us.

In August 2013 Mitch Hurwitz had an interview with The Guardian, disussing Arrested Development Season Four and the Boston Chipyard

Definitely. It's so funny to hear you say Chip Yard! Oh God, I used to pray that the Chip Yard would burn down. I was 13 and my brother was 15 and we had this little family business and it was just like Arrested in a way because no one then was just selling cookies, especially in a beach community where it was all ice-cream and popcorn.

I remember people screaming at me: "You can't do that! I'm going to burn your fucking Chip Yard to the ground!" People were so angry. My father pushed us to do the Chip Yard to show us how hard it is to make a buck, but it wasn't difficult with the Chip Yard as it immediately started making money. So he was like: "This money is going into a college fund." So we didn't get any money and we worked around the clock – I still have burns on my arms. So I really liked this idea of some kid sweating in a stand while kids outside are laughing on the beach.

Retrieved from "https://arresteddevelopment.fandom.com/wiki/The_Boston_Chipyard?oldid=45986"
Community content is available under CC-BY-SA unless otherwise noted.