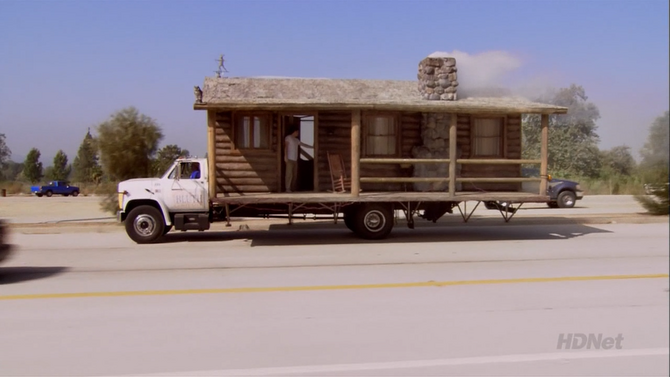 "The Cabin Show" is the first episode of Arrested Development's third season.

Michael postpones camping with his son to look for his father in Reno. Meanwhile, Lucille goes off her medication; G.O.B. meets a fellow disappointed son; and Maeby and George Michael can't help being thrown together.

Michael Bluth begins his day with something he’d never seen before: good news about the Bluth Company. Television financial expert Jim Cramer upgraded Bluth Company stock from triple sell to don’t buy. Michael tells Lucille he is going to prison to gloat about the good news. He had sold the property for the family cabin to keep the company afloat, and the move paid off. The success will allow Michael to spend more time with his son, George Michael.

Lucille also wants Michael to spend more time with her son, Buster. Buster has been snoring, and it is keeping Lucille awake at night. Furthermore, after mistaking Tom Cruise for a doctor talking about the evils of medication on The Today Show, she has quit taking her postpartum medication and is stressed out. Michael suggests that she relax by visiting the cabin before it is relocated.

As Lucille walks out the door, G.O.B. appears from behind it. He complains that he never knew about the cabin because George never took him there. Michael reveals that despite his father’s promises, he has never been to the cabin either, because something always came up. The two argue about who’s plight is sadder, and G.O.B. promises that if he ever has a son, he will take him to the cabin. Michael offers to take G.O.B. to the cabin so they can see it for the first time.

As Michael heads off to prison, he discovers George Michael asleep in the stair car. George Michael says he is sleeping in the stair car because he wants to see his father, but in fact, since sharing a kiss with Maeby, he has been trying to avoid her, and needed some place to sleep. Touched, Michael decides to take George Michael to the cabin instead of G.O.B., much to G.O.B.’s disappointment.

At the prison, Michael eagerly tells his father about the company’s success, not knowing it is actually Oscar, George's twin brother, that is in jail. Oscar tries to convince everyone that he is the wrong twin, but nobody, including Michael, believes him. Oscar has even started a website, imoscar.com, to claim his innocence. Michael ignores Oscar’s pleas and announces his intentions to take his son to the cabin. Oscar understands, saying that Michael’s son comes first, and Michael suddenly realizes that he really is Oscar.

Michael returns to the office to figure out how to free Oscar. He finds Lindsay and the employees celebrating the good news about the company. Lindsay tells Michael she will use the new money to buy a car, and shows him several copies she has made. She claims she needs a new car because Tobias has left her. Michael tells her she only wants Tobias because she cannot have him, and if she has him, she would not want him.

Michael finds G.O.B. in his office, and tells he and Lindsay that it is actually Oscar in jail, and that George is on the loose. Michael asks if anyone has heard from their father. G.O.B. had secretly received a letter from a group called S.A.D. that reunites fathers and sons. Having not read the letter, G.O.B. now thinks it is his father’s way of secretly contacting him. Michael calls the family’s lawyer, Barry Zuckerkorn, to find out if he knows where George is. Barry’s assistant informs Michael that Barry has gone to Reno to meet George.

Michael decides to go to Reno to find his father, but it means canceling his plans with his son. George Michael suggests that since the Cabin is in Lake Tahoe, near Reno, they could combine the trips. Michael thinks that is a bad idea, but notices his son seems eager to go on a camping trip. He suggests that instead, George Michael could pop a tent in the front yard with Maeby. Michael’s suggestion makes Maeby and George Michael extremely uncomfortable.

G.O.B. arrives at the S.A.D. center, expecting to find his father. He sits down on a bench next to Steve Holt, who is also expecting to find his father. The Narrator reveals that Steve Holt is actually G.O.B.’s son, and he has been trying to track down G.O.B.. The two do not realize they are looking for each other, but, upset that their fathers have not shown, decide to go on a son-son camping trip to the cabin.

Michael arrives in Reno, looking for his father. Unexpectedly, he finds Tobias working at Swallows, a family-style restaurant by day and an anything-goes, pan-sexual bazaar by night. Tobias confesses that he missed out on a role with the Blue Man Group in Las Vegas, so he came to Reno to audition. Furthermore, Kitty has left him after Tobias found blue hand prints on her. Tobias says he wants to get back together with Lindsay, and Michael agrees to arrange that. He also figures that George must hiding as a Blue Man, and be responsible for the blue paint on Kitty.

Michael calls Lindsay to tell her he has found Tobias. Knowing that she only wants what she cannot have, he convinces her Tobias does not want to come back. Lindsay decides that she will go to Reno to get Tobias herself. She drags George Michael and Maeby along in the stair car. Tobias calls Lindsay while she is on the road, sending mixed messages about whether he wants to see her. Lindsay turns the stair car around after each comment by Tobias, forcing the already uncomfortable kids to fall on top of each other, before finally deciding to keep going to Reno.

Michael goes to the Blue Man show, looking for George, but finds Barry. Michael fires Barry, who fears he may have to resort to prostitution to make ends meet.

As Michael is forcibly taking his son out to the cabin, Lucille is ready to forcibly throw hers out. Fed up with Buster’s snoring, she hits his bed with a tripod. However Buster was not in his bed. Worried about what she would do when Buster returns, Lucille decided to drive out to the cabin. On her way to the cabin, Lucille discovers that Buster is sleeping in the back seat of her car. Buster explains he was sleeping in the car so his snoring would not bother Lucille, but he left a recording of his snoring so she would not know he was gone. Buster and Lucille decide that a night at the cabin might be the exact shot in the arm their relationship needs. In Reno, Tobias was trying to find a way to convince Lindsay that he was not only a Blue Man, but still with Kitty.

Michael and George Michael finally arrive at the cabin, only to find the bedrooms have already been moved. George Michael, still upset about being taken away from Maeby, reveals that he has not been sleeping in the stair car because he misses his father, but because he is in the middle of a girl problem. Michael promises to help his son figure out his problem tomorrow morning, re-assuring George Michael that they will not be moved by his family again. But when Michael wakes up the next morning, he finds that the cabin has been moved from its location, and it is being driven on a truck by George, who says that he cannot allow his son to release Oscar, otherwise the police will once again be after him.

Retrieved from "https://arresteddevelopment.fandom.com/wiki/The_Cabin_Show?oldid=54763"
Community content is available under CC-BY-SA unless otherwise noted.