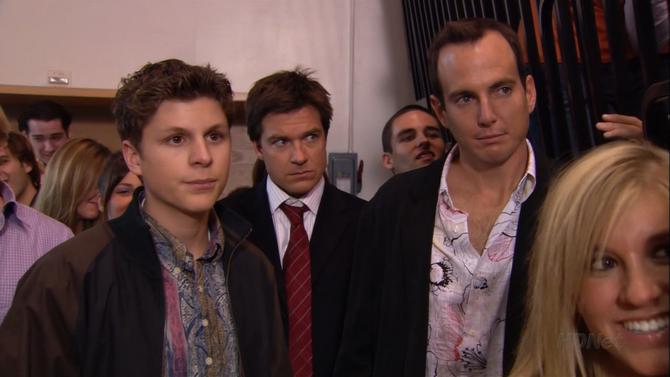 "The Immaculate Election" is the fourteenth episode of Arrested Development's second season.

George Michael runs for student body president, which G.O.B. manages to ruin; Buster has an affair with Lupe, who is being sought after by Lindsay; Tobias attempts to move out of the model home, then develops a new persona when he regrets his decision.

Michael is surprised to find the house still a mess a week after the fumigation, which Michael had Lindsay call and arrange, long before Michael had begun hiding his fugitive father in the attic. Michael complains about Lindsay's laziness, but she is preoccupied, having finally kicked Tobias out of the house, telling him that he would never work as an actor and that their relationship wouldn't work either.

With nowhere to go, Tobias ends up at the studio where he occasionally works as a guard, and takes up residence in the apartment of Detective Frank Wrench on the set of Wrench. G.O.B. is concerned that Tobias took the video camera, which he needs it to make a magic video of tricks around the office. Michael wants G.O.B. to concentrate on work more, needing him for an upcoming project vote. G.O.B. laughingly mentions the time that George Michael used the video camera to recreate a Star Wars battle in the garage (a parody of the Star Wars kid).

Realizing that George Michael might be having self-esteem issues, Michael talks to his son, only to hear Ann has beaten him to it by suggesting George Michael run for student body president. She has offered to run his campaign and create a campaign video. Lupe takes pity on Buster for losing his hand, Lindsay feels sorry for herself for her loss of Lupe, because Lindsay now has to clean the model home by herself.

While looking for a spot to store all the garbage she's collected, Lindsay goes into the attic and comes upon an old friend, the doll she had as a girl, which had become George Sr.'s only friend in the world. At the office, Michael has come to regret having given G.O.B the video camera. During a meeting on the latest Bluth Company project, G.O.B. performs a magic trick. Michael, frustrated that G.O.B. didn't show to give his vote in support of the project, fires his brother. Michael then runs into Maeby, who is using the office copier to make campaign posters for Steve Holt. Michael, now informed that George Michael isn't as popular as he once imagined, heads to the school to prevent his son from signing up for the presidential race. Having been defeated himself in a high school race, Michael knows what a devastating blow this could be.

Lucille finds Buster in bed with Lupe and promptly fires her. Lindsay then comes upon the just-fired Lupe, but Lupe won't work for her. Michael arrives at the school to talk his son out of running for office, but George Michael has already collected the required signatures and is excited to run. Ann is hanging posters highlighting George Michael's chaste nature. G.O.B. arrives at Lucille's to complain that Michael has fired him. Lindsay finds a replacement maid, Tobias, who is dressed like Mrs. Doubtfire. He borrowed the costume from the studio in an attempt to see his daughter and prove to his wife that he has what it takes to become an actor.

Michael returns home. He and Lindsay both immediately recognize Tobias in his costume, but neither say anything to him. Michael is more concerned with his son being crushed by Steve Holt in the school election. Lindsay says it's too bad that George Sr. isn't around because they could have used some of his dirty tricks to rig the election for George Michael. Unfortunately for Michael, George Sr. stumbles across a religious pamphlet left by Ann and has a profound realization. Michael instead goes to G.O.B., who he fired earlier that day. G.O.B. agrees to help, on the condition that Michael re-hire him.