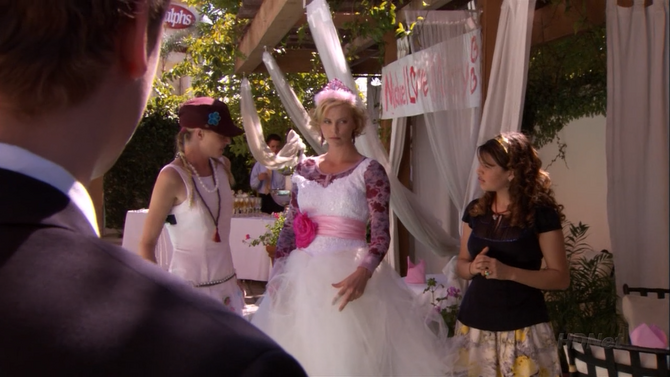 "The Ocean Walker" is the sixth episode of Arrested Development's third season.

Michael's parents disapprove of him marrying Rita until a revelation from her uncle.

Michael was sharing some very important news with his parents. He was getting married. George and Lucille thought this was a very bad idea, but Michael defended his relationship. But what Michael didn’t know is that mentally, Rita had only progressed to a first grade level, a fact that was masked by her English accent. Michael told the family the wedding was in one month.

Concerned that his family may have been making sense, Michael decided to talk to Rita. At the model home, Michael ran into Tobias, who was now getting around in a wheelchair because of numbness in his left arm and legs. Michael attributed this to Tobias’ recent hair transplant. Maeby then mentioned to Michael that she loved Rita because Rita had helped her with a little project the previous evening. It seemed that Maeby needed help with a script she was working on for her secret studio job. The man was in L.A., his love was in Tokyo. How to get them together? Rita suggested having them walk. Maeby thought this was brilliant since nobody could critique it for fear of looking stupid and set to finishing The Ocean Walker.

Michael went to G.O.B. to tell him not to do an illusion due to him accidentally setting his former wife, Tracy on fire at his last wedding and to be his witness/best man. Michael regrets doing this, as G.O.B. wants to get a call girl for the bachelor party.

Meanwhile, Lindsay and Rita, quickly becoming the best of friends, returned from a shopping excursion. Michael took Lindsay aside and expressed his concerns about the lack of physicality in the relationship, wondering if Rita was just using him for a green card. Lindsay suggested getting a hotel room for the evening.

And G.O.B. began to prepare an illusion for the wedding. Rita oversaw and told G.O.B. that she loved magic and begged him to do a trick for her. He tried to shoot her with a fireball, but only succeeded in dousing her with lighter fluid, a feat that Rita still found remarkable. G.O.B. realized he needed to get Rita involved in his wedding illusion somehow. Rita bragged that she could hold her breath for 20 minutes. The Narrator revealed her actual record was only 20 seconds.

Michael then caught up with Rita and invited her to a hotel for the evening. Rita said she needed to get her jammies and tiny teddy first. And so George-Michael drove Rita to Wee Britain. That’s when he first became concerned over her behavior. While Rita packed for her sleepover, her Uncle Trevor warned her about what that truly meant. Rita complained that she wanted to have some grown up fun, but Uncle Trevor said she wasn’t ready for a sexual relationship (the Narrator agreed). Rita retorted that she was since she had seen Uncle Trevor’s secret magazine, Bumpaddle, and that she and Michael were getting married. Forbidding her, Uncle Trevor put "invisible locks" on the door, so Rita stormed to her room.

At the same time, Michael was sprinkling rose petals on a hotel bed and awaiting Rita's arrival. He called his father to brag that he and Rita were at a hotel and very much in love, so George asked his son to put her on the phone. After claiming that she was in the shower and then watching two episodes of E! True Hollywood Story with his father over the phone, Michael finally admitted that she wasn’t there. And she still wasn’t there the next morning when Michael and George awoke, phones still to their ears.

Michael drove to Wee Britain to call off the wedding. He asked Rita to tell him to his face why she never showed, but she said the invisible locks made it impossible to open the door. So Michael decided to scale the fire escape to rescue the beautiful, sweet mentally challenged woman he had fallen in love with without realizing she was mentally challenged. Pulling her through the window, Michael then used Buster’s hook on the overhead Poppins wire and, with Rita on his back, gently descended to the ground. And so, reunited with Rita, Michael told his parents he’d be getting married tomorrow.

But that’s when George and Lucille had a surprise visitor, Uncle Trevor. He was looking for Rita, adamantly declaring that she wasn’t getting married. That there was no way Michael was getting her millions simply because she was mentally challenged. George and Lucille focused more on the millions part. Uncle Trevor went on to explain that Rita owned all of Wee Britain, as well the Wee Britain in Cleveland, which Uncle Trevor feared she might lose if the plans for her idea of a floating town, Sea Britain, came through.

George said that Michael wasn’t after her money, and Lucille remarked that Michael probably didn’t even know about her condition. Uncle Trevor admitted that most Yanks are fooled by her accent, and the plastic surgery Rita recently had also masked her condition (the show cuts to a shot of Charlize Theron from Monster). Uncle Trevor vowed to stop this wedding, even if he had to search every hotel in town. George and Lucille directed Uncle Trevor to Legoland. But when he left, they said they had 24 hours to find Michael and Rita and get them married.

Later that night, Michael was at the hotel with his bride-to-be. She told him she was ready for sexual relations, then brought out her Bumpaddle paddle. But then George Michael knocked on the door. George Michael struggled with his words at first, then finally told his father he had been videotaping Rita lately. He showed Michael footage of Rita eating the plastic fruit in the model home. Repeatedly. Michael finally realized that Rita was a few steps slow, then thought back on the mountain of evidence he had missed over the past weeks.

Back in the room, Rita was ready for their adult fun, but Michael was now trying to find a way out. He suggested waiting until after they were married. The next morning, however, as Michael prepared to let Rita down gently, he was surprised by his family, which was throwing him a surprise wedding. Lucille drummed up excitement for the day, but when George made an aside about Rita being retarded, Larry the surrogate repeated it. Michael couldn’t believe his family would stoop so low, then realized Rita must be rich. George fired Larry. Michael caught up with Rita to set everything straight.

He explained that things couldn’t work between them and she realized she had to go back to England with Uncle Trevor. After a sad goodbye, Rita walked away over the pool. Michael asks G. O. B. if that was a part of his magic trick but he says no. In the "next time" segment G.O.B. reveals, "It's my illusion!" He then accidentally sets Tobias on fire.