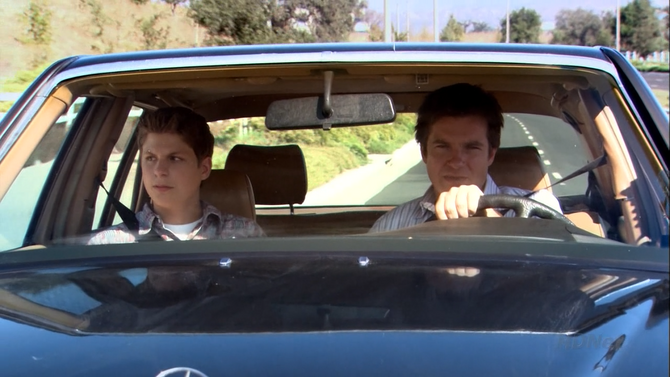 "The One Where Michael Leaves" is the first episode of Arrested Development's second season.

George Sr. is at large, making Michael next in line to be prosecuted for the Bluth Company crimes. Meanwhile, Michael is vexed to find that the family is fine without him, and police mistake Oscar for George Sr. and arrest him.

Hours after learning his father had escaped prison, Michael Bluth and George Michael drive in the family's Mercedes to Phoenix to start a new life. Realizing their family wouldn't understand the importance of his departure, Michael returned to tell them in person. They don't seem to need him, which slightly hurts. After hitting the road again Michael is pulled over by the police, routinely checking in on George Bluth's license plates. The officer informs Michael that his father has been caught.

At the police station, Michael finds out that is was Oscar who was apprehended, not George. Before he can hit the road Barry informs Michael that he must not leave California as the government wants to charge him with aiding and abetting his father. He can, however, pay bail before leaving.

To proud to ask for help, Michael tries to track down the company checkbook. His mother doesn't have it, nor does Lindsay nor G.O.B.. Returning to the model home, Michael decides to search inside the walls of the model home for evidence hidden by his father. Instead he finds Tobias who advises him that asking for help isn't a sign of weakness.

Suddenly called to the hospital, Michael breaks and asks his family for the checkbook. G.O.B. reveals that he found a briefcase containing a contract between George and Saddam Hussein, but that it had gone missing. George, disguised as Oscar, had stolen it in the family's moment of grief.

With his identical twin brother on the lam, Oscar Bluth was violently arrested by the police. At the police station he informs Lucille that his trailer has been impounded and that he is homeless. Lucille, annoyed by Buster's recent attitude allowed Oscar to move in as a father figure for Buster. Oscar hinted that he was more than just a father figure.

At the apartment Buster and Oscar bond, to the annoyance of Lucille. While heading out for groceries, a Michael Moore impostor asks Lucille if she'd sign Buster for the the army. She says yes.

Given the master bedroom of the model home, Lindsay and Tobias decided to give their relationship another try. Both were overcome with fear so they decided to attempt an open relationship. After inadvertently flirting with a realtor Lindsay bragged to Tobias and Maeby about finding a date. A dejected Tobias walked along the waterfront and found a sign advertising a group for men feeling blue.

The flyer turned out to be an ad for the Blue Man Group and Tobias was mesmerized by the group and decided to audition to become an understudy. After painting his entire head and torso blue Tobias had a discussion with Michael before heading to the audition.

Lindsay, meanwhile, met the realtor for a date. To calm her nerves about the open relationship, she took a shower. As it turned out, the realtor was only interested in showing her the house, not dating her.

After vowing the leave the family, Michael is replaced by G.O.B. as the president of the Bluth Company. Within his first hours G.O.B. causes thousands of dollars of damage by turning the Bluth Company offices into a relaxed party office. His flashy magic showmanship allowed him to dazzle the board.

While attempting to hang a picture in his office, G.O.B. discovered a metal briefcase containing a contract signed by both George Bluth and Saddam Hussein hidden in the wall. Although he was cocky about his competence to Michael earlier, he finally decided to ask Michael for advice while at the hospital for Tobias.

Michael: You haven’t auditioned yet?

Michael: There’s got to be a better way to say that.

Retrieved from "https://arresteddevelopment.fandom.com/wiki/The_One_Where_Michael_Leaves?oldid=54776"
Community content is available under CC-BY-SA unless otherwise noted.