The One Where They Build a House 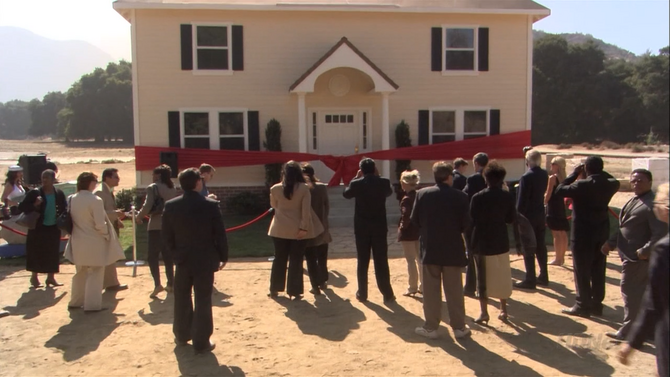 "The One Where They Build a House" is the second episode of Arrested Development's second season.

Michael is driven crazy by G.O.B. when he impresses the board as the new company figurehead due to Michael's legal troubles. Meanwhile, George Sr. is arrested in Mexico for a crime Oscar committed, and Buster witnesses something that utterly shocks him.

Although still acting as second in charge at the Bluth Company, Michael pitched an idea to Lindsay: ramp up excitement and funds by starting development on a second model home and a flashy ribbon-cutting ceremony. George Michael asks if his friend Ann can attend, but Michael seems less excited about Ann especially when his son explains that he wants to buy her a diamond.

Michael pitches his business model to G.O.B. who wants to take the spotlight for the board. Michael tells him he must find a business model of his own. G.O.B. also informs Michael that he has just purchased The Seaward to keep up appearances. G.O.B. shortly after received a phone call from George in Mexico expecting to reach Michael, which hurts G.O.B.'s feelings.

After Michael presents the idea of the second model home to the board, G.O.B. steals the spotlight by cutting the scope from two months to two weeks and using Starla and her "Solid as a Rock" tagline. He privately tells Michael they can build a fake home to trick the board. Michael employs Oscar, George Michael, Buster, and Tom Jane to build the home.

Michael and G.O.B. argue over who will cut the ribbon. G.O.B., wanting to impress Michael and his father, wins over Michael's generosity. At a flashy ribbon-cutting ceremony G.O.B. cuts the ribbon and the shell house falls to pieces. Michael and G.O.B. fight with the giant scissors and Starla's rock, creating a media frenzy. Back at the office they agree to not let their father put them at odds ever again.

At Balboa Towers Buster is still startled by "zoo noises" coming from his mother's room. He is startled by an inappropriate Oscar. The next day he visits the army doctor to attempt to prove he's too weak to serve. However, the army's recruitment is low so they accept him. He complains to his mother and Oscar, who were making out in the cabinet.

Hoping to get injured, Buster helps construct the second model home. Lucille attempts to kick Oscar out of the apartment but ends up making out with him at the beach, which is caught on tape and aired on FOX 6. At the ribbon cutting ceremony Buster attempts to get injured by the collapsing house but ends up seeing his mother and Oscar making out inside the home. He decides to go to army as an act of defiance.

Excited about her open relationship, Lindsay asks Michael to buy some diamond cream makeup. He refuses and patronizingly asks how their experiment is going. Both lying, they say they've already sealed the deal. In reality, Tobias has auditioned for the Blue Man Group and has been following Lindsay while wearing blue paint.

Lindsay, trying to meet someone down to earth approached a laid-back and scruffy guy. Realizing he was homeless, she grew disgusted and walked away. After second thoughts she tried to get him a job as a construction worker so he could get a life and date her. Turned out he was movie star Tom Jane researching a role on homelessness. She didn't get the clue and continued to ask him on a date. After he walked a way, a diamond-cream covered Tobias consoled her and asked her to take him to the hospital.

In Mexico, George Bluth waits in a hotel room with Kitty. Getting cabin fever, he leaves to call Michael but is apprehended by the Mexican police, believing he is Oscar Bluth. After explaining that he was George, he was arrested for a worse crime: selling The Cornballer in Mexico.

After failing to get money to pay off the police, George is listed as dead on Los Mas Buscados de Mexico.