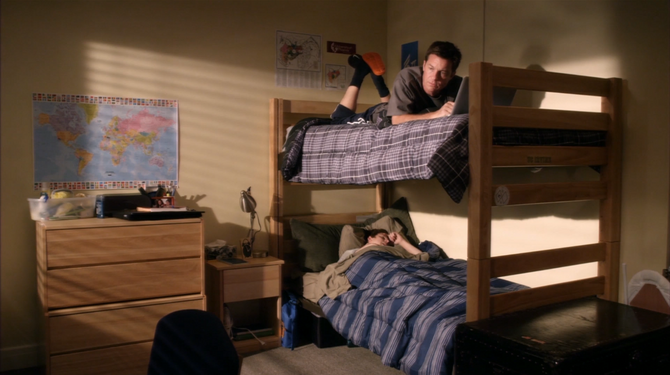 "The Parent Traps" was the sixth episode of chronological re-cut of Arrested Development's fourth season. It premiered on Netflix on May 4, 2018.

Michael unwittingly causes friction when he moves into George Michael's dorm room. Buster looks for companionship while his mother is gone.

After the crash of the housing market, Michael gets a loan from Lucille 2 to support his business. However, no buyers appear and, after the death of the mailman Pete, Michael moves into George Michael's dorm room. George Michael was accidentally given a larger room due to be mistaken for two people, because of his name. He wants Michael to leave but he can't admit it to him.

Meanwhile, Lucille arrives at the Orange Country Correctional Facility L.I.T.E. to serve her sentence and Buster starts to date Lucille 2 again. G.O.B. also tries to make amends with Ann and proposes to her again but she leaves him for good. This inspires him to reconnect with his son, Steve Holt.

At college, George Michael discusses his blocking software, Fakeblock, with Michael while Michael is excited because Altitude, an in-flight magazine, want to interview him about his property business. Buster continues to attempt to visit Lucille in prison but she refuses to see him everytime. His relationship with Lucille 2 falters as well as he wants her to act like a mother and not a girlfriend so she kicks him out.

George Michael suggests having a vote to decide who should leave the dorm room as he has another roommate now called P-Hound. Michael was concerned that George Michael has no privacy from P-Hound after he walked in on Maeby visiting George Michael while P-Hound was waiting outside. Michael suggests that Maeby joins in on the vote and that they vote together to remove P-Hound from the dorm. Michael spends hours working on this plan and decides he should vote himself out so the vote doesn't look rigged. However, he doesn't realise that George Michael doesn't want him to stay and Michael himself is voted out from the dorm.

On the next Arrested Development... Buster attempts to sell the jewels from his hook before deciding to re-join the army.

Retrieved from "https://arresteddevelopment.fandom.com/wiki/The_Parent_Traps?oldid=54746"
Community content is available under CC-BY-SA unless otherwise noted.