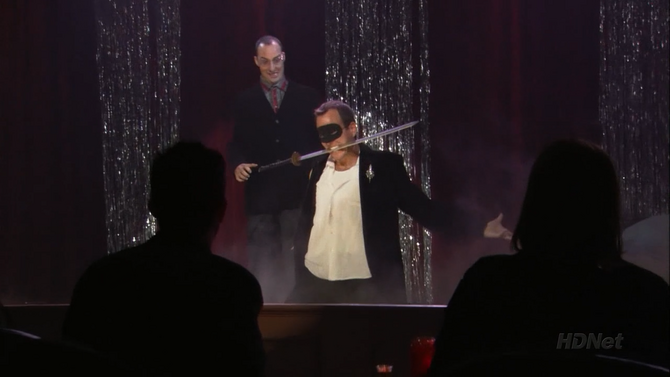 G.O.B. purchases The Sword of Destiny at Ancient Chinese Secret and comes up with a plan to get him back into The Alliance of Magicians.

G.O.B asks Buster to apply as the magician (since G.O.B. is blacklisted) with G.O.B. as the assistant. They meet Tony Wonder at the Gothic Castle who shows interest in their proposed act — ramming the sword through G.O.B.'s belly. During the first performance that evening, G.O.B. accidentally "cuts off" Buster's fake hand, impressing the audience.

They meet with Tony again and G.O.B. reveals that he's the real magician and the second time they perform it will be more amazing. That evening they perform the illusion again, but Buster accidentally cuts off G.O.B.'s finger tips. ("Sword of Destiny")

Retrieved from "https://arresteddevelopment.fandom.com/wiki/The_Sword_of_Destiny?oldid=55205"
Community content is available under CC-BY-SA unless otherwise noted.