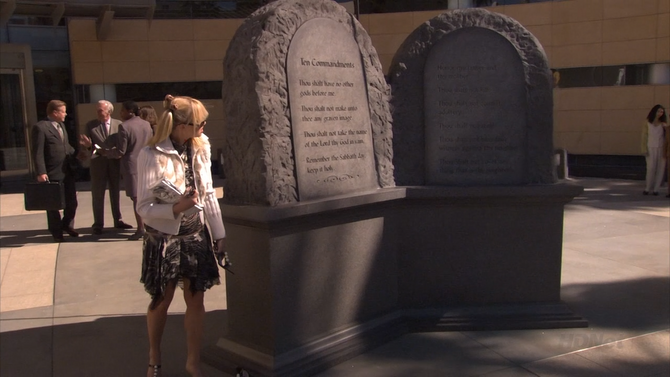 The Ten Commandments are ten points of guidance followed by the Jewish and Christian religions. After breaking her heel on a statue of the Ten Commandments outside the courthouse, Lindsay protested to have it removed. The statue later fell on Barry's car, which momentarily made him vow to clean up his life. ("Justice Is Blind")

The Ten Commandments are later seem in the lawn of the courthouse. ("Righteous Brothers")

The Bluth family attempts to quote the Commandments, to little success:

G.O.B.: Thou shalt protect thy father, and honor no one above him unless it beith me — thy sweet Lord.

Michael: Thou shalt not make up a name in vain.

Michael: G.O.B., you’re going to burn through this money and have nothing, all right? “You give a man a fish, he’ll eat for a night. If you teach a man to fish...”

G.O.B.: He’ll want to use your yacht, and I don’t want this thing smelling like fish.

Retrieved from "https://arresteddevelopment.fandom.com/wiki/The_Ten_Commandments?oldid=39765"
Community content is available under CC-BY-SA unless otherwise noted.