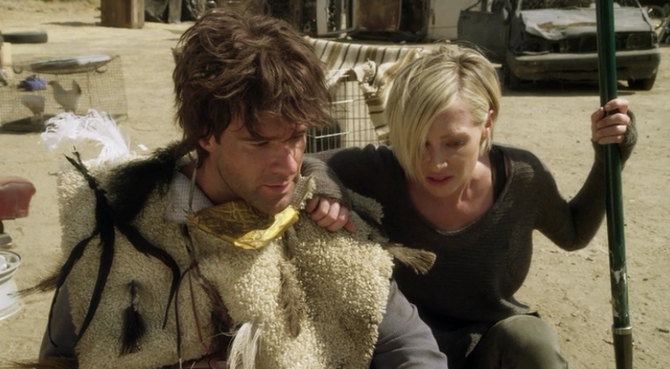 "The Weak Become the Strong" was the eighth episode of chronological re-cut of Arrested Development's fourth season. It premiered on Netflix on May 4, 2018.

With nowhere else to go, Buster returns to a place he knows he's welcome. Lindsay and Marky leave the desert for more comfortable surroundings.

At Father B.'s Colony, George Sr. and Oscar are running a scheme to get money from CEOs by letting them spend an hour in the sweat lodge with Oscar before George Sr. convinces them to spend $10,000 on a glass of lemonade. George Sr. and Lucille are also pretending to divorce so they can work on their border wall project together without people suspecting them. George Sr. and Oscar eat maca and see a vision telling them to leave or the land will change them although they are unconvinced.

The vision was actually Marky Bark dressed as an ostrich because he lives with his mother and Lindsay on a ostrich farm next to the sweat lodge. Lindsay begins to hate her life however, when she finds out that Lucille has been put in prison, she decides that she should live in the now abandoned Balboa Towers apartment with Marky Bark and his ostrich. Unbeknownst to Lindsay, Maeby is also living in the apartment although she leaves before Lindsay can notice. Meanwhile, Buster has been kicked out by Lucille 2 and decides to return to the army.

One year later, George Sr. is now struggling to motivate the CEOs while Oscar becomes more belligerent. Lindsay and Marky Bark are still living in the apartment although its now been trashed. Marky Bark is planning to make a glitter bomb to protest Herbert Love, a very conservative politician, at a rally. His rival is Lucille 2, who Lindsay has been spending her time with. Lucille 2 has given Lindsay food as well as a red wig but she hides this from Marky Bark, who considers Lucille 2 to be "part of the problem". At the apartment, Lindsay also finds a $50,000 check for Maeby which she reads as "From Gangie for facelift".

In prison, Lucille finds out that Buster has been injured while piloting a plane. She rushes to the hospital to find Buster unharmed because he was actually piloting a drone over Afghanistan. The army hadn't told Buster that the drone was killing real people and, when Buster finds out, he cannot cope and falls off his chair. He has a new robotic hand because the army felt they must pay him off since he didn't know that he wasn't playing a game and he could sue. Buster wants Lucille's forgiveness but she tells him to grow up. The army still want Buster, however, so they can use his new hand as a weapon.

Barry arrives at the sweat lodge colony to tell George Sr. that he must pay $15 million because of the mortgage on the land. Barry suggests getting Herbert Love to support the border wall so they sell the land to the government. George Sr., who has become more distant from Lucille, convinces Oscar to visit her in his place so George Sr. can go to the Herbert Love rally.

Lindsay visits Lucille in prison to confront her over the check and Lucille finds out that Lindsay has been living in her apartment. Lucille tells Lindsay that they're much more similar than she thinks and, to prove her wrong, Lindsay decides to support Marky Bark's glitter bomb.

On the next Arrested Development: Fateful Consequences... Oscar, pretending to be George Sr., finds out about the border wall from Lucille before starting to seduce her.

Retrieved from "https://arresteddevelopment.fandom.com/wiki/The_Weak_Become_the_Strong?oldid=54748"
Community content is available under CC-BY-SA unless otherwise noted.