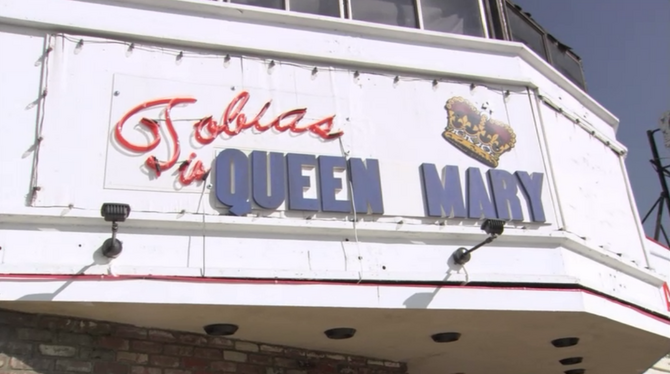 The Tobias is Queen Mary, formerly the Queen Mary, is a club in Newport Beach owned by Tobias for a short time.

Although the club is a local transvestite and gay hangout, Tobias took Buster to the club to meet women (as he was in his open relationship at the time and Buster was single) and Buster ran into Lucille Austero.

Tobias purchased the club when some Bluth Company stocks were unfrozen. He wanted it to be titled "Tobias' Queen Mary" but there was some miscommunication. Lindsay hired the Hot Cops to scare Tobias away from the property but Tobias convinced them to turn their lives to dance. Not understanding they weren't real rough necks, he took the show to the street where he and the dancers were severely beaten. He then sold the night club to Barry Zuckerkorn, who always wanted a family restaurant. ("Queen for a Day")

Add a photo to this gallery
Retrieved from "https://arresteddevelopment.fandom.com/wiki/Tobias_is_Queen_Mary?oldid=39629"
Community content is available under CC-BY-SA unless otherwise noted.