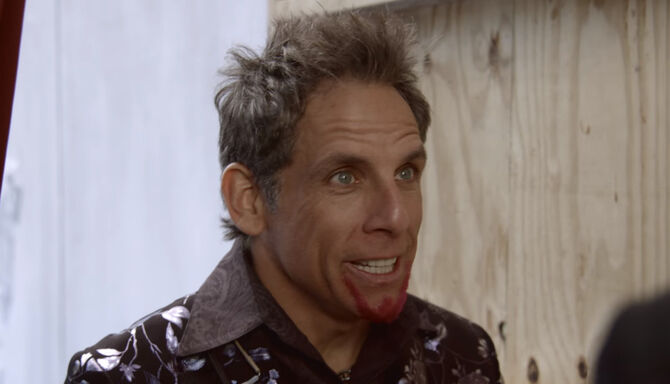 Tony Wonder: DID SOMEBODY SAY WONDER!?

Tony Wonder was a rival magician to G.O.B. and his romantic interest. G.O.B. and Buster are fans of his.

He is first seen in an issue of Poof magazine for baking himself into a giant sandwich to feed the troops. This made G.O.B. jealous and attempt to do the magic coffin illusion. ("Good Grief")

His favored illusions appear to be to produce items from thin air, such as (warm) bread, Hanukkah cookies and Subway Sub Club cards. Another of his tricks was to appear from thin air himself when somebody said "wonder" - which he achieved by hiding in a dumbwaiter at The Gothic Castle.

He was attempting to create a video of magic tricks called Use Your Illusion. However, a band (Guns N' Roses) have the rights to that name (a reference to real-world issues with Arrested Development's name). He was considering Use Your Illusion 2, but it turns out Guns N' Roses have the rights to that too. His next choice of name was Use Your Allusion. In this final case, he planned to include actual allusions, such as by Edgar Allan Poe. G.O.B. and Buster performed The Sword of Destiny illusion as an audition to appear on Use Your Allusion. ("Sword of Destiny")

G.O.B. mentions that Tony Wonder lost a nut by keeping a hungry dove down his pants. ("Making a Stand") Tony attends the Bluth family's "Save Our Bluths" party. ("S.O.B.s")

G.O.B. seduces Tony Wonder (and Tony seduces G.O.B.) as acts of revenge, but the two begin to have feelings for each other. Tony wants to ruin's G.O.B.'s Christian magic act and G.O.B. wants to frame Tony and ruin his gay magic act. Tony is not actually gay, but is in a relationship with Sally Sitwell and has previously impregnated Ann. Frustrated with both men, Ann tricks Tony and G.O.B. into sleeping with each other while wearing masks of each other's faces. ("A New Attitude")

Michael sees Tony in the model home with G.O.B., who forces Michael into eating a Forget-Me-Now (pill). Tony takes a Forget-Me-Now himself and doesn't remember the sexual encounter he had with G.O.B. Tony calls him the next morning to set up a date again. ("Blockheads")