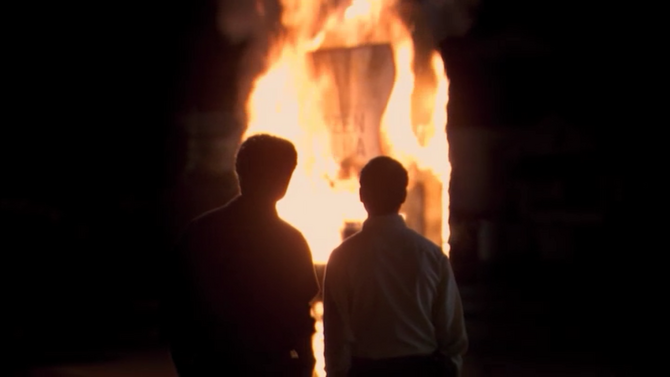 Michael puts George Michael in charge of the Bluth Frozen Banana Stand, and his son subsequently burns down the stand. Elsewhere, Tobias auditions for a commercial, and Lindsay inadvertently gets the part.

John Beard of FOX 6 reports that The Banana Stand has been burned down.

A week earlier, Michael meets with his father at prison to ask where his flight records are located. George Sr. asks Michael to get his former bunkmate T-Bone, a "flamer", a job at The Bluth Company, but Michael refuses.

Michael heads over to his mother's apartment to ask her about the location of the flight records. She refuses to tell him but he later thinks of a ruse to get Lucille to lead him to the records: he warns her of an IRS audit on her furs. Lucille has Luz take all her furs to the storage unit where the flight records are kept. Michael tracks Luz and finds out T-Bone has burned the unit down.

Michael is confronted by G.O.B., who wants to be given some responsibilities. Michael asks him to mail a single letter. Michael then heads back to prison to make a stand against his father, who tells him "there's always money in the Banana Stand". The next day T-Bone begins working at the Banana Stand, as hired by George Sr., so Maeby and George Michael take off to have lunch. At the restaurant, George Michael realizes they are doubling their losses by throwing away bananas for every dollar they take and begins to panic.

Michael then finds T-Bone at the Banana Stand and heads to the beach to clear his head. Michael then receives a call from Maeby, warning that George Michael is about to burn down the Banana Stand. He agrees to help him as a sign of defiance against George Sr. While they watch it burn, Michael asks G.O.B. if he has mailed the stand's insurance check. G.O.B. had hurled it into the sea, and flees Michael on his Segway.

Michael cockily eats an ice cream sandwich at prison and tells his father that the Banana Stand has been burned down. George becomes angry, and tells Michael there was $250,000 lining the walls of the Banana Stand.

Tobias heads out into the world to find an audition. Michael shows him a flier for an open casting call for a "fire sale" TV advertisement. Tobias auditions for the ad as if it were a real fire. When the casting director Roger Danish sees Lindsay's reaction to the sale, he gives her the part. Lindsay celebrates her new job and Tobias is seen crying in the shower. Lucille takes her daughter out to lunch, and the two make jabs at each other throughout the lunch.

The next day, Linsday oversleeps and misses the ad taping. Tobias misses his call from Roger Danish because he was crying in the shower again.

Lucille: Luz, that coat cost more than your house! Oh, that’s how we joke. She doesn’t even have a house.

Tobias: Oh, my God, we’re having a fire. Sale. Oh, the burning! It burns me! Evacuate all the schoolchildren!

Retrieved from "https://arresteddevelopment.fandom.com/wiki/Top_Banana?oldid=54795"
Community content is available under CC-BY-SA unless otherwise noted.