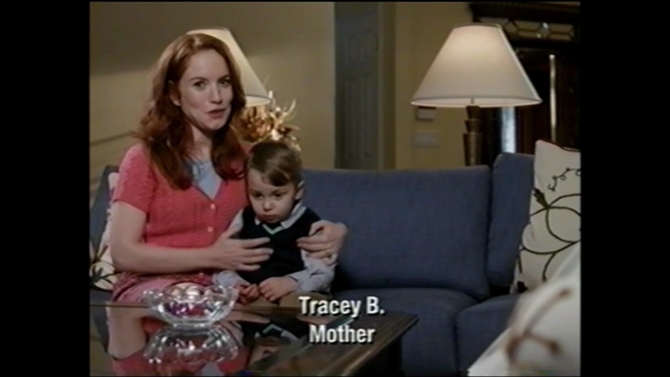 Tracey Bluth is Michael's deceased wife and George Michael's mother. Her death is what drives Michael to pursue a stronger relationship with their son George Michael. It is revealed that prior to her death, she was in a coma for several months. She died of ovarian cancer in the Bluth family beach cottage.

Tracey is only mentioned in the first three seasons and the fifth but appears in a flashback video in "It Gets Better".

Lucille: You’re the only child who chose a spouse I liked, and she’s the one who had to die.

Michael: I know. That’s rough for you.

George Michael first mentions his late mother in "Pilot". In "Shock and Aww" Michael mentions to Beth Baerly that he was previously married and his wife passed away. It is hinted that George was not that fond of his daughter-in-law, while Lucille was quite fond of her as seen in "Storming the Castle".

In "Public Relations" it is revealed by George Michael that Michael was married his sophomore year of college.

In a flashback in "Whistler's Mother", a young Michael worries to his mother that because he failed an assignment "Tracey won't marry me". It is unknown if it is the same Tracey Michael married, but it is the first time the name "Tracey" is used.

In "¡Amigos!" Tobias criticizes Michael for being bad with marriage advice, since his wife had died. He then apologized.

In the model home's attic, several boxes are labeled "Tracy" [sic]. While living in the attic, George wears some of Tracey's maternity clothes and perfume in "Sad Sack." In this same episode, Michael makes one of the few mentions of his deceased wife by name.

In "Out on a Limb" Barry Zuckerkorn reveals that he had been taking credit for Michael's divorce, not knowing that Tracey had died.

In "The Immaculate Election" it is suggested that Michael and Tracey were married because of an unplanned pregnancy (viz. of George Michael). Michael laments that George Michael is "such a great kid and everybody loves him. He’s George-Michael! Truthfully, that’s why I’m not crazy about that Ann, but he’ll move on." To which G.O.B. responds: "Unless he knocks her up like you did with his mother."

That Michael and Tracey's marriage was occasioned by Tracey's unplanned pregnancy is further suggested in the episode "Meat the Veals" when, after George Michael and Anne decide to break off their pre-engagement, Michael, relieved, counsel's his son: "You have so much to experience before you make a commitment you're not ready for."

George: “Ovarian cancer.” Gee, I wonder who that was.
From "Prison Break-In"

In "The Ocean Walker", it is hinted that G.O.B. accidentally set her on fire during her wedding to Michael, which occurred in 1989.

In "Prison Break-In", Michael supports ovarian cancer research as a benefit cause for the Bluth company, implying that is what Tracey had succumbed to.

When Michael meets with Ron Howard about producing a Bluth family movie, Ron notes that he'd like to include the deceased wife storyline for "fun". Michael runs into Rebel Alley on the sidewalk who reminds him of Tracey's red hair, and he flirts with her. ("The B. Team")

Tracey and an infant George Michael appeared in a 1992 advertisement for George Bluth's Babytock! product. ("It Gets Better")

Michael: We need to speak to you about getting a divorce for G.O.B.

Barry: I got Michael out of his marriage, didn’t I?

Barry: You’re kidding me. I’ve been taking credit for that for years.

Michael: And I don't know whether it's just Tracey's maternity clothes, but it's nice to see a softer side of you.