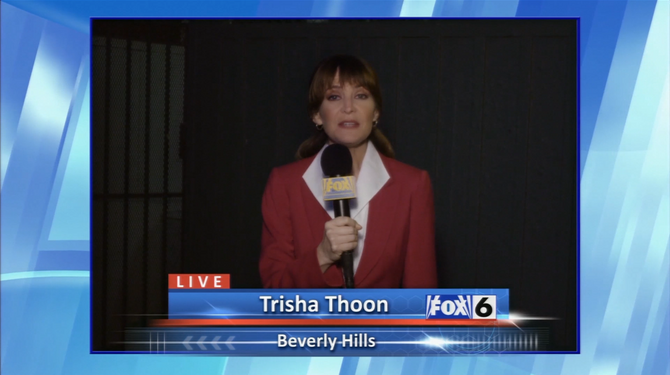 Trisha Thoon is a field reporter for local FOX 6 News. She has appeared in several episodes to report on events that have made the headlines in the local area.

Trisha reports on how G.O.B. (pronounced "gawb") was able to hide George Bluth Sr. in the Aztec Tomb. She then states that it was a good trick, however, the search dogs found George instantly. ("Pilot")

She later reported on Johnny Bark's protest of the Bluth Company's low quality mini-mansions. ("Key Decisions") She also reported on Lucille and Lindsay's fight with Jessie Bowers at a bar. ("Public Relations")

Trisha reports on Saddam Hussein's "mini-mansions" in Iraq and how they are being investigated by the US government as it appears they were built by an American company. Michael watched the news report on FOX 6 and realized they were exactly the same model as the Sudden Valley model home. ("Let 'Em Eat Cake")

Retrieved from "https://arresteddevelopment.fandom.com/wiki/Trisha_Thoon?oldid=36523"
Community content is available under CC-BY-SA unless otherwise noted.