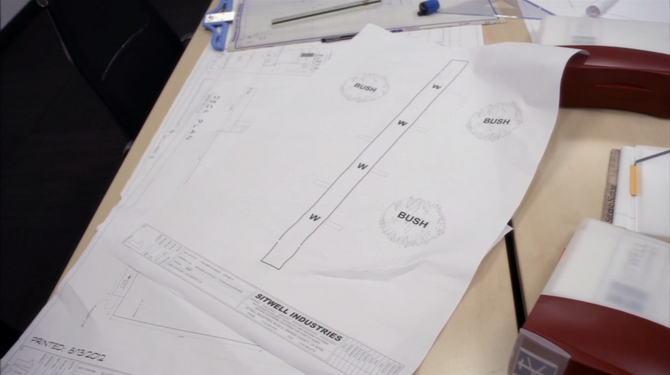 George and Lucille Bluth schemed to profit from building a wall between the US and Mexico. The Bluth Company won the bid from the US government but complications arose when the project was canceled, forcing George to bribe Herbert Love to supporting the project.

In early 2006 George Bluth visited Stan Sitwell to sell him his remaining shares of the Bluth Company but Stan refused, bragging about a project that would make him bigger than Halliburton Teen. George photographed blueprints and Lucille told him they were plans to build a wall between the United States and Mexico. They decided to underbid the government contract. George then found out his twin brother Oscar was living on border land and purchased the property to gouge the government when they wanted to build the wall. The wall project was postponed when the economy took a hit so George and Oscar opened Father B.'s Colony to make some extra income. (4x2 — "Borderline Personalities")

Lucille suggested that Olive Garden's Chinese gang connections invest in the wall project to kickstart the government payout for the wall, but the wall was never built despite the money being paid. (4x10 — "Queen B.")

In 2012 Barry told George he owed $15 million on the land and suggested bribing right-wing politician Herbert Love to start the wall project again. (4x2 — "Borderline Personalities") George met with Love and bribed him $50,000 to start the wall project but returned to the desert to find his property was actually in Mexico and worthless (because Oscar used Buster's hand-drawn map.) George tried to get Love to flip-flop but Love wanted another bribe. ("Double Crossers")

George visited Michael at Orange County Imagine and asked him to get Love to oppose the wall. Michael agreed if George would give him his Balboa membership card in return. The next day Michael ran into Lindsay at the Ealing Club and asked her to get Love "against the wall" and in return he'd have Warden Gentles free Marky Bark from prison. Later in her hotel room, Lindsay told Love she wanted him "against the wall" and he thought she meant as a sexual position, not a political position. (4x8 — "Red Hairing")

Lucille suggested to George they start construction just enough to trigger the government payoff and simultaneously to blackmail Love into opposing the wall so their Mexican land wouldn't be valueless. (4x10 — "Queen B.") George and Buster filmed a tape of them driving around a Hall & Burton's Frozen Goat Cream silo, posing it to be the wall. (4x6 — "Double Crossers")

A disgusted Lucille then called G.O.B. to do a better job at starting the wall project. (4x10 — "Queen B.") G.O.B. tried to get Mexican day laborers to build the wall, but they refused. He started to dig by himself in Mexico and China Garden told him she can get a Chinese crew to build the wall for him. (4x11 — "A New Attitude")

On the night of Cinco de Cuatro, Michael drunkenly told his father that he got Love to speak against the wall. George pleaded with Michael not to tell Lucille Austero about his bribe toward Herbert Love but he ended up giving the game away himself. She threatened George that if Love didn't oppose the wall she'd talk about it in her speech. (4x6 — "Double Crossers") G.O.B. asked his father for money to pay the Mongol horde to build the wall. George said there was no money so G.O.B. told the horde they wouldn't get paid. (4x15 — "Blockheads") The Mongols grew violently angry and the blowback started. They rioted and stole Lindsay's necklace. Thinking they were Mexicans, Lindsay started chanting "put up this wall!" (4x8 — "Red Hairing") Nearby, George Michael was giving a keynote speech on Fakeblock to which he also started the chant "put up this wall!" (4x15 — "Blockheads")