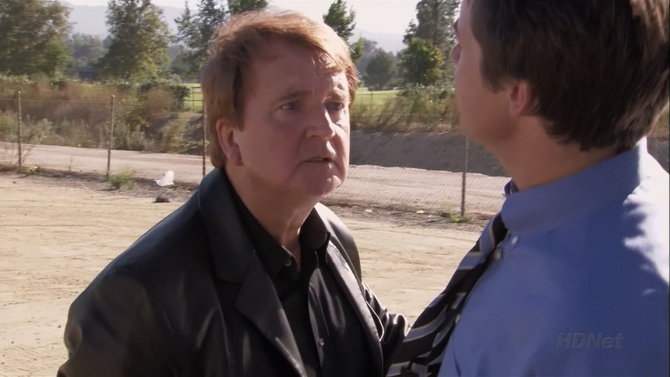 Uncle Trevor is an English man and the uncle of Rita Leeds. He helped raise Rita, whose parents were cousins which he implied might be a cause for her retardation.

He lives with Rita in Rita's apartment in Wee Britain. He is a chain smoker to the point where he smokes while he brushes his teeth. ("Mr. F") He has stereotypically bad teeth and breath. ("For British Eyes Only") He is an avid fan of cricket and Bumpaddle magazines. ("The Ocean Walker")

Trevor peers at Michael inside The Yellowfang. He later swerves his car at Michael's stair car and demands he pull over. He then yells at Michael about flirting with Rita, and threatens "How would you like someone going after some stupid person in your family?" ("For British Eyes Only") He then challenges Rita to get closer to Michael, thinking that when Michael discovered her MRF secret he wouldn't like her anymore. ("Forget-Me-Now")

Trevor gives instructions for Rita to get on the train. ("Notapusy") When Rita acts out against Trevor, he reminds her of her promise to a golden star, which later turns out to be a piece of chocolate. He stalks her and Michael on the Tunnel of Love, Indubitably ride at Tantamount Studios and falls into the hot tub. ("Mr. F")

After Michael proposes to Rita, Trevor fights with her, afraid that because she is an MRF she doesn't understand what she's getting herself into. He puts invisible locks on the door so Rita can't abscond with Michael. When she does, Trevor swings by Balboa Towers and asks Lucille and George Bluth where Rita is. When they find out she is very rich they send Trevor to Legoland. He eventually comes back and picks up Rita when Michael calls off the wedding. ("The Ocean Walker")

Retrieved from "https://arresteddevelopment.fandom.com/wiki/Uncle_Trevor?oldid=32607"
Community content is available under CC-BY-SA unless otherwise noted.